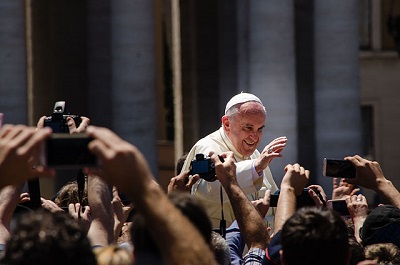 Even admirers of Pope Francis may have been taken aback by the wall-to-wall coverage that has greeted his visit to the United States. My own media appearances talking about the pope seem to expand into second segments, and move to the front of every show. MSNBC carried his remarks at the White House and to a joint session of Congress unedited.

Only one in six Americans are religiously observant to the point of attending a religious service in any given week. Of those, only a portion are Catholic. And yet, we see the entire Congress rise to give him standing ovations. Hillary Clinton is piggy-backing on his appearance. Barack Obama, who has tangled with America’s Catholic bishops on a number of issues, is rolling out the red carpet. Occasional critics of Pope Francis, like myself, find themselves surprisingly moved.

I’d suggest a huge part of the spell the papacy has cast over modern worldly powers can be attributed to the institution’s longevity. The Catholic Church and the papacy are by far the longest-lived institutions of Western civilization. Francis’ predecessors have played a diplomatic role in the political life of the West since before the emergence of all the modern nation-states. Popes tangled with King Otto and Charlemagne. The Popes called the Crusades. The papacy has survived all manner of intrigue, even when Napoleon I had Pope Pius VII kidnapped and dragged over the Alps to Fontainebleau Castle. It’s a longevity that any nation or throne would envy. To welcome the Roman pontiff into Congress is to be entered into this long chain of history.

Read the full story at The Week