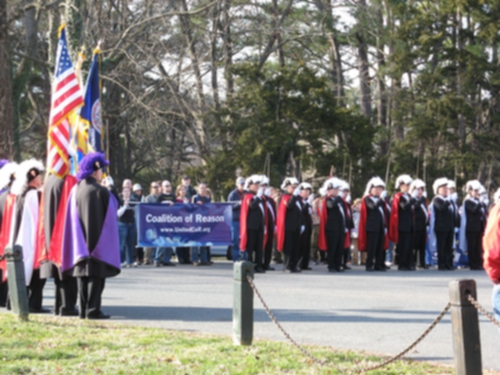 With weather better than anyone could hope for, about 20 members from various Fredericksburg Coalition of Reason member groups turned out to march in the annual Religious Freedom Day Parade organized by the Knights of Columbus.  We marched about one mile from the train station to the monument on Washington Ave that commemorates the drafting (by Thomas Jefferson in Fredericksburg) of what became Virginia’s Statute For Religious Freedom in 1786.  That statute states, principally:

"… Be it enacted by the General Assembly, That no man shall be compelled to frequent or support any religious worship, place, or ministry whatsoever, nor shall be enforced, restrained, molested, or burthened in his body or goods, nor shall otherwise suffer on account of his religious opinions or belief; but that all men shall be free to profess, and by argument to maintain, their opinion in matters of religion, and that the same shall in no wise diminish enlarge, or affect their civil capacities."

At the monument, there was a ceremony for the assembled parade participants, spectators, and assembled dignitaries, with a keynote address by Congressman Rob Whitman and culminating with the laying of a wreath at the foot of the monument.

Following the event, we adjourned to various sites to share our thoughts and socialize.  Our spokesman, Matt Jordan, provided the following message to our participants:

"Today we were one with the local gentry celebrating our birthright.  It is well that we should celebrate the words of Jefferson every year, shoulder to shoulder with our fellow citizens.  But now we embark, unencumbered by dogma to live our lives governed by science, sense and reason.  We will find new friends and make a difference in our community not out of fear of non-existsnt demons or angels, but by our reliance on our own clear thinking.  You are all to be congratulated.  You took the first step today to show that we, at least, are fully aware that we can all be good without god.  Thanks for a great day."