Sacramento CoR, a grassroots group of Sacramento atheists, humanists and other non-theists scored a big win this week. When a school district sent 20,000 emails to students’ families promoting “Bring Your Bible To School Day”, they asked for an Atheist Day as well, which brought about a new policy.

In October 2015, Focus on the Family–a Christian fundamentalist group–submitted a flyer to the school promoting “Bring Your Bible To School Day”. After the school sent the flyer to its students, the district also approved the Sacramento atheist group’s flyer for “Freethought Day”, and later in the year another flyer for “Chanukah Wonderland”.

All of these events and flyers caused parents to complain to the school board about blatant violations of the separation of church and state. Eventually the district adopted a new policy that doesn’t prohibit religious organizations from promoting events for students. It does however, require them to offer a clear educational benefit. Purely religious events are not considered appropriate.

The new policy shows respect to the religious diversity of the community while also respecting the rights of Sacramento atheists, humanists and other non-believers.

See the video on KCRA News: 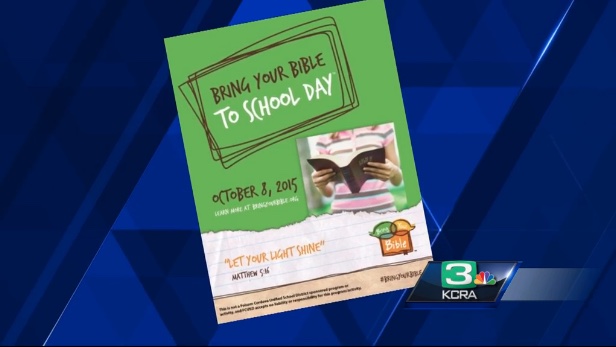