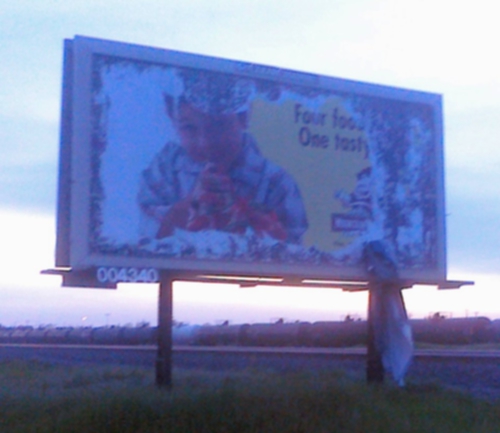 (Sacramento, March 1, 2010) With just one week to go in its four-week billboard campaign, the Sacramento Area Coalition of Reason had two more of its ten billboards vandalized over the weekend. The one on the west side of Roseville Road, just north of Longview Drive, visible to southbound traffic passing McClellan Air Force Base, had nearly all of its vinyl torn off by vandals, revealing most of the previous billboard underneath. And the one on the west side of Auburn Blvd., nearby just south of Myrtle, also facing north, had "Christ Loves U" spray painted roughly in the lower right-hand corner.

This follows in the wake of the vandalizing of a different Sacramento CoR billboard a little over two weeks ago. That one is on Interstate 80 midway between Sacramento and Davis, California. All the billboards read: "Are you good without God? Millions are." But in this earlier case the words "also lost?" had been spray painted below the "Millions are." Clear Channel, the company that owns the billboard, quickly replaced it with a new one.

But with all the billboards scheduled to come down this Friday, the United Coalition of Reason, the national organization that paid for the billboard campaign, won’t request free replacements. Instead, it is asking Clear Channel to allow two of the other eight billboards to remain up an additional week.

"This isn’t Clear Channel’s fault, nor is it ours. The fault rests entirely with the vandals," said Fred Edwords, national director of United CoR. "So our goal is to ensure that this mischief has as little negative impact as possible on both our campaign and on the billboard company that has so ably served us."

Mike Krebsbach, a press representative for Sacramento CoR, added, "Our billboard message reaches out to those who know that people can be good without belief in a supreme being. It doesn’t say that believing in a god makes one bad. So why would the vandals act as if the belief actually had that effect? It’s a sad day when we have to witness such cavalier disregard of property and free speech rights. Wouldn’t it have been better if those who disagreed with us had sought to open a dialogue, instead?"

United CoR is filing a police report today. "The defense of liberty and property are central American values," Edwords concluded. "Their protection benefits us all, religious and non-religious alike. So, by our standing firm on the importance of our message and our right to proclaim it, everyone wins except the vandals."

On its website the Sacramento Area Coalition of Reason says its purpose is "to increase awareness of secular-minded groups throughout the Sacramento area." The coalition was launched on February 9 when the ten billboards were announced. An image of this latest vandalism will soon be available, free for media use, at www.sacramentocor.org .

The Sacramento Area Coalition of Reason ( Sacramento CoR ) is a collaboration of freethought, skeptic, atheist and humanist groups in the Sacramento area. It serves as a resource for the public and offers a means of combining the voices of those who hold that science and reason lead to more reliable knowledge than dogma and faith.