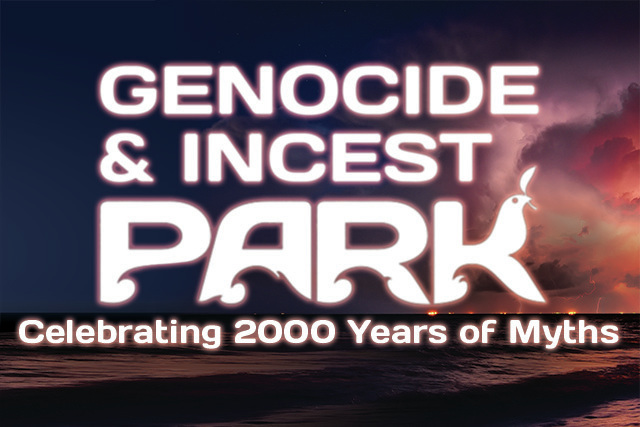 Tri­State Freethinkers will protest the grand opening of the Ark Encounter in Williamstown, KY on July 7 at 10am. Joining them will be American Atheists, Secular Coalition of America, Freedom from Religion, United Coalition of Reason, Secular Student Alliance, Kentucky Secular Coalition, and Young Skeptics. Their controversial “Genocide and Incest Park” billboard will be displayed for one day at the protest on July 7th. (https://goo.gl/MAq8nI)

“Their mission is anti-­science, the story is immoral, and they practice discriminatory hiring practices while receiving up to $18 M in state tax incentives. We are making a stand for equal rights and the separation of church and state,” said Jim G. Helton, President of the Tri­State Freethinkers.

Following the protest, Tri­State Freethinkers will host a Rally for Science and Reason at the University of Cincinnati at 7pm. The Rally will feature national speakers to celebrate the importance of science education, freethought, critical thinking, and the importance of challenging religious fundamentalism. The event is free but seating is limited. Please RSVP in advance http://goo.gl/mBxOPj.

Tri­State Freethinkers launched a successful crowdfunding campaign and raised over $10,000 to put up a billboard which depicts the Noah’s Ark based theme park as a “Genocide and Incest Park”. They have been unable to find a company willing to put up the billboard.

The Ark Encounter is a life-­sized replica of Noah’s Ark that Ken Ham will use as an “evangelical tool” to expand on Answers in Genesis’ mission to teach and promote creationism as an alternative to evolution. Full details on the protest, rally and information about Tri­State Freethinkers is available at http://www.tri-statefreethinkers.com.

Tri­State Freethinkers is a social, academic, and activist group with over 1500 members in Kentucky, Indiana, and Ohio. They are advocates for equal rights and the separation of church and state. They empower members to make positive change by giving back to the community. They encourage critical thinking and decisions based on facts, logic and reason, not superstitions, myths, or dogma.