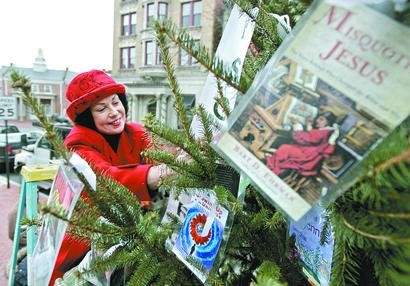 A special rhyming article by Margaret Downey
President–The Freethought Society, a Cooperating Group of the Philadelphia Coalition of Reason (PhillyCoR)

In 1993, I started to see
that the holiday season did not include me.

The West Chester Courthouse had holiday cheer,
but only the religious were allowed to be near.

Believers in a god were welcomed with joy.
Nonbelievers, were not—they would surely annoy. 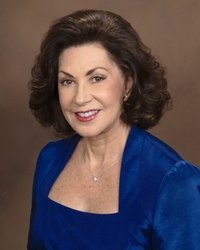 A crèche with baby Jesus was given a space.
A menorah with lights also had a great place.

And because it’s only totally fair,
a Chamber of Commerce Tree was also put there.

I asked, “How can nontheists get a chance, too?”
The problem back then was that nobody knew.

I conducted a search and asked lots of friends,
then gathered ideas for secular trends.

We finally settle on one special tree,
one that could speak for more than just me.

It’s important, we thought, to display learning books.
Intellectual books that would get many looks. 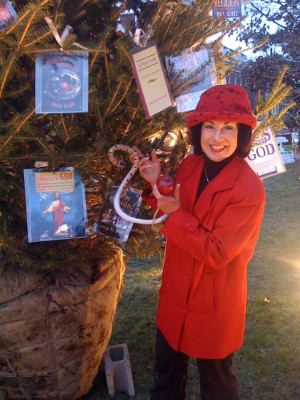 The tree needed a name to convey our clear vision.
The name Tree of Knowledge was the final decision.

In 2007, we got our big chance,
book cover ornaments would hang from each branch.

That first Tree of Knowledge was an amazing sight,
but soon it would cause a ridiculous fight.

The Commissioners imposed some made-up new rules,
in an effort to please some objecting town fools.

“The books are just wrong,” those fools would proclaim,
and yelled very loudly, “It’s atheists we blame.”

Year after year the tree was reduced.
The Commissioners had only one thing to boost. 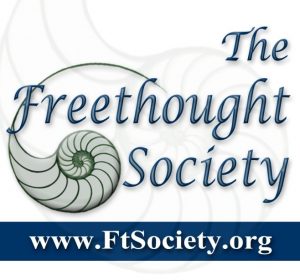 “Religion must reign on the Courthouse grounds.
We only allow the pious of sounds.”

It took the Commissioners three years and a day,
to force nontheist citizens to just go away.

A Resolution was passed that stated so clear,
“Nontheists can’t show the books they hold dear.”

That was the year of 2010…
the nontheist crowd could no longer come in.

“The Santa and choo-choo will suit you just fine,
Your books are not welcome – get rid of your pine.”

Each year since that time, nontheists have pleaded
they just want equality – accepted and heeded.

Hundreds of nontheists have presented the case.
Each Commissioner, however, froze a frown on their face.

The Ethical Society jumped into the fray,
and welcomed the tree in their lobby to stay.

It’s been seven years, and people are happy.
The ethical books make the tree look quite snappy.

Please also place a Tree of Knowledge in your very own home.
Nontheists of all types will tell you, “Shalom.”

On behalf of The Freethought Society, the Philadelphia and Baltimore Ethical Societies, and the Philadelphia Coalition of Reason, inclusive Season’s Greetings are wished to everyone around the world, and best wishes for a prosperous New Year in 2018 to all secular-friendly communities!