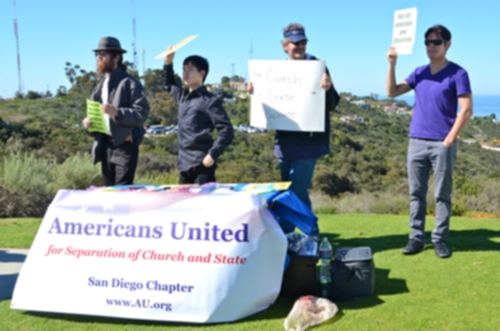 By Heather L. Weaver, Program on Freedom of Religion and Belief at 5:36pm

Today, we were pleased to learn that the Supreme Court declined to review ourchallenge to the federal government’s display of a 43-foot-tall Latin cross atop Mt. Soledad in San Diego, California.  The ACLU and the ACLU of San Diego and Imperial Counties brought the case on behalf of the Jewish War Veterans of the United States of America—the oldest veterans’ organization in the country – and several local residents.

The Supreme Court’s decision lets stand a January ruling by the U.S. Court of Appeals for the Ninth Circuit, which held that the cross display violates the Establishment Clause of the First Amendment to the U.S. Constitution.   As the Ninth Circuit explained, “The use of such a distinctively Christian symbol to honor all veterans sends a strong message of endorsement and exclusion. It suggests that the government is so connected to a particular religion that it treats that religion’s symbolism as its own, as universal. To many non-Christian veterans, this claim of universality is alienating.”

The lawsuit’s journey through our judicial system has been long and winding and need not have ever reached the Supreme Court’s door. Twenty-three years ago, veterans sued the City of San Diego, arguing that the display of the mammoth cross on city property was unconstitutional.   Agreeing with the veterans, the Ninth Circuit eventually ruled in 1993 that that the cross “carries an inherently religious message and creates an appearance of honoring only those servicemen of that particular religion.” After several efforts by the city to circumvent the court rulings, and years of litigation, the parties reached a tentative settlement in 2004 that would have moved the cross to a neighboring church.

This resolution, which was supported by veterans’ groups at the time, would have preserved the cross, while, at the same time, eliminating the hurtful and divisive message that the city valued the contributions of Christian veterans over those of all others.  The loss of this message was more than some people could bear, however, and various groups helped scuttle the deal, ultimately lobbying Congress to “save” the Mt. Soledad Cross as a “historic symbol of Christianity in America.” Instead of respecting the wishes of veterans to move the cross to private property, Congress bowed to these demands, designating the cross a national veterans memorial and seizing the property using eminent domain.

The central premise of this case should have been fairly uncontroversial:  The government should not discount the sacrifice of any veteran simply because he or she is not Christian; and government war memorials should honor all veterans, regardless of faith.

Though some have claimed otherwise, the simple fact is that a Latin cross does not represent all veterans. The government should not be sending a message that it favors one faith over others, especially when it comes to our veterans. Now that the Supreme Court has declined to hear it, the case will return to the district court to fashion a solution that will, we hope, honor all veterans by reaffirming this well-established principle and ordering the government to remove the display.