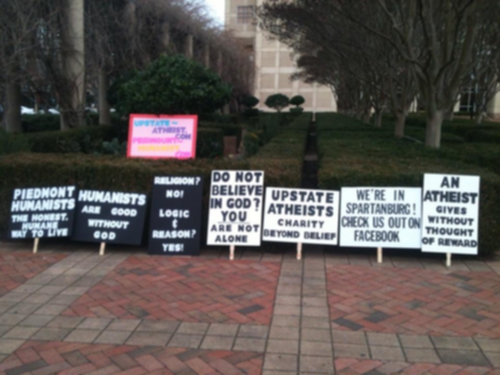 The big surprise: "We actually had more people either driving by and considering the signs or praising us than we had haters. There were only about four people that yelled at us three from their cars and one woman right as we were finishing up that was yelling at us to move on. We had at least twice as many giving us a thumbs up or yelling good for ya’ll! We actually had one young man that definitely wanted to look into our groups. This walk went smoothly because it was done the legal way with a permit. After only 30 minutes the police called my phone saying that a couple of people had called in complaining about us. The officer asked me for the details of the permit and who signed off on it. I had the permit in front of me and was able to tell her any detail she needed. After three minutes of conversation she said we had the right to walk around the whole downtown area and to enjoy ourselves. We headed on our way and walked for another hour and forty minutes."