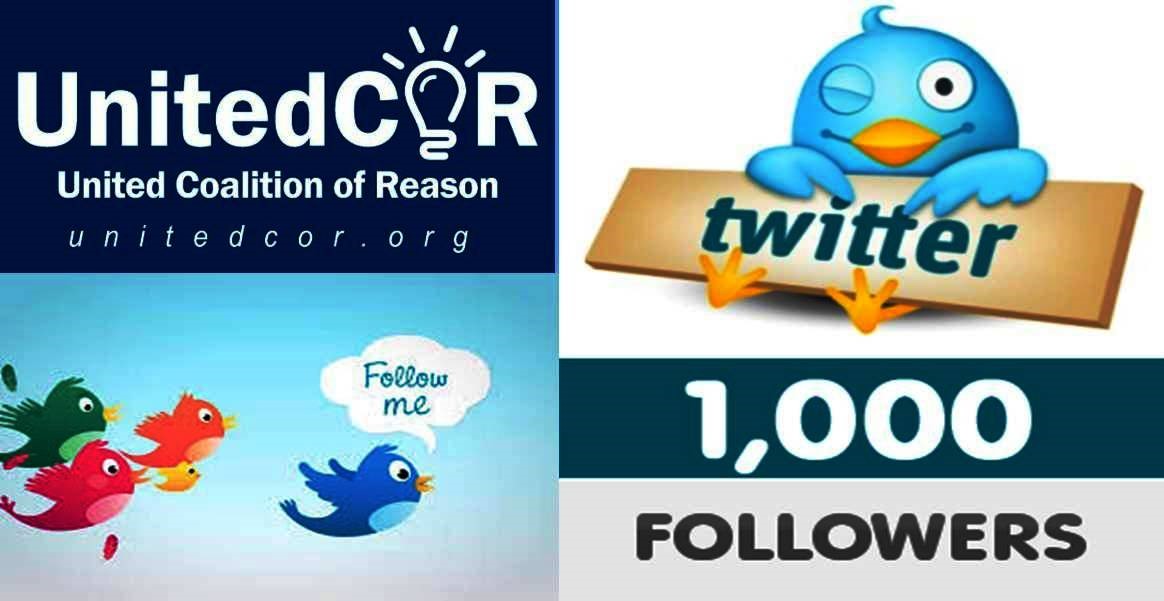 On May 9th 2016, UnitedCoR celebrated its 1,000th follower on Twitter. This social media milestone is important to us, as UnitedCoR only started its Twitter account in mid-November 2014.

If you haven’t linked with us at Twitter, please check us out @UnitedCoR, and we’d be happy to re-tweet some of your most important tweets. Likewise, be sure to link with us on Facebook, https://www.facebook.com/CoalitionOfReason/, as well as the Secular Directory, which is nearing its 5,000-like milestone: https://www.facebook.com/seculardirectory/.

Connecting with UnitedCoR’s social media means that we can use our social media to help your group and organization get its message out to more people by sharing stories to our social media feed. Here’s an example from American University’s Humanist Chaplain, Rabbi Binyamin Biber, of how working together gets results:

Thank you both for your support of the Humanist Chaplaincy at American University (AU), which just completed its fifth academic year of creating an active and visible Humanist community at American University. In February, the chaplaincy was fortunate and grateful to have join as assistant chaplain, UnitedCoR’s Executive Director, Executive Director of the United Coalition of Reason. This past year, the Chaplaincy’s student membership increased from 423 to 618, as students have invited so many of their classmates to explore & experience Humanism, and a growing number of non-theistic young people have searched for, and found our Chaplaincy. This was accomplished through campus-wide electronic display screens, our website and Facebook outreach, personal conversations, tabling and other visibility and outreach events where we distributed Chaplaincy and other Humanist brochures, pins, stickers, and literature. All this has helped the Chaplaincy to share the ideas & active efforts of Humanism with AU’s students, faculty members, and staff who come from all over this country as well as over 130 other nations.

Among the highlights of our activities this year was the following:

1) Our bi-weekly discussions featuring Humanist angles on current affairs, new books, articles I distributed by email, and personal sharing about coming out as Humanists. These regular gatherings maintained a core of 25 active participants who became the student leaders of the Chaplaincy’s programs, and who lead the AU Humanist Community student group (AKA AUHC, formerly the AU Rationalists & Atheists–AURA) which in 2014 joined the Chaplaincy as a chapter of the American Humanist Association.

2) Our monthly speakers’ series were our best attended events, and the most successful of these drew 50-100 undergrad & grad students, as well as AU faculty, staff, and community members.

3) Advocacy events – The Chaplaincy helped organize 100+ AU students to attend several marches and rallies (including several at the US Supreme Court and on Capitol Hill), and lobby days for human rights, women’s rights, #LGBT equality, and secular separation of religion and government (or religious and civil authority structures and practices).