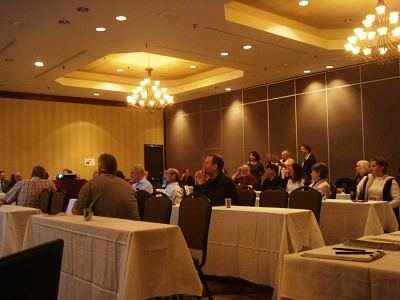 The conference featured a variety of speakers beyond those usually featured, bringing new perspectives and new messages. The event began with Justus Cade—a graduate of Liberty University and a member of a local WASH chapter—who asked a provoking question in his presentation, “Are atheists hurting Humanism?” whereby he demonstrated how nontheistic internet trolls provide negative and unfavorable  confrontational reputations.

Dr. Julien Musolino—New Jersey CoR member and professor from Rutgers University—spoke about the scientific benefit from letting go of beliefs in a soul. Dr. Ron Lindsay, the president and CEO of the Center for Inquiry, drew on his new book that outlined the need for secularism and why America has no historic or contemporary need for theo-centric beliefs to influence secular civil policies. Blue Ridge CoR’s Dr. Andy Thomson, a well-published and respected scholar and psychiatrist, talked about happiness and well-being, and that there is no significant scientific evidence to demonstrate that those who profess a belief in a deity are any more content with life than those who do not.

Austin Cooper, the Director of Operations for the Secular Coalition for America, provided insights into the SCA’s work. Austin also spoke of the need for the local nontheistic electorate to take a practical and active interest with local, state and national political outreach. United CoR’s UnitedCoR’s Executive Director used the recent media surrounding the Kim Davis saga in Kentucky and the religious liberty rhetoric from Liberty Counsel to discuss colonial American understanding of religious liberty and how recent “sincerely-held belief” in the workplace has departed from its historical roots. Linda LaScola, who co-founded The Clergy Project, provided the keynote address in an interview with Dr. Andy Thomson regarding her research that led to The Clergy Project.

What made this conference special was the family atmosphere that the organizers worked hard to create. All of the conference’s speakers attended each other’s sessions, and spent time discussing their presentations with members of the audience and each other during the breaks and meals. A well-known local band, URTH, provided the evening’s musical entertainment.  Although John Davidson (Chairman of the Honorary Board of Openly Secular and host of TV shows such as That’s Incredible and Hollywood Squares) was unable to attend the conference because he was celebrating the birth of a new granddaughter, he made a special video and sent it to the conference just hours before Saturday evening’s festivities.  Margaret Downey, President of The Freethought Society (a member of Philly CoR), served as the MC and provided an update on the Reason Rally 2016.

Congratulations goes out to Paul Hoyt of Lynchburg Area Secular Humanists (LASH), Samantha McGuire of WASH and their team of volunteers from FIVE CoRs who helped to create a successful and enjoyable WASHCon15!!

*The writer of this article did not leave their name.  We would like to give credit for a job well done.  If the author would be so kind email Deanna at [email protected] and she will credit you for your article.