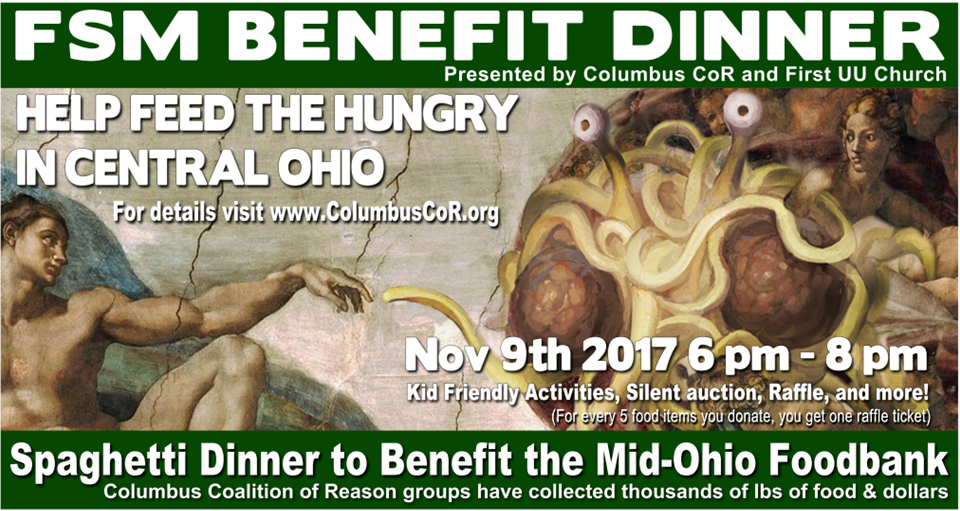 Final results are in for the November 9, 2017 6th Annual FSM Benefit Dinner. 244 lbs of food were collected and $2,599.09 was raised for the Mid-Ohio Foodbank. 140 diners enjoyed the noodley goodness prepared by 27 volunteers from local humanist, atheist, and skeptic groups. This fun-filled event featured craft beer, a bake sale, raffle and silent auction of items donated by 30 area businesses and local artists/donors. Musician Alan Reed entertained diners and Camp Quest provided activities for children. Columbus CoR groups have collected a total of 1,774 lbs of food and $14,145.46 for the Mid-Ohio Foodbank from 2012 – 2017:

The event was held at the First Unitarian Universalist Church of Columbus and Melissa Lawson served as master of ceremonies. The 27 volunteers who produced the event are members of the following groups:

Businesses and individuals that donated items for the raffle, silent auction and bake sale include:

Next year’s event is tentatively scheduled for Thursday, November 8, 2018.