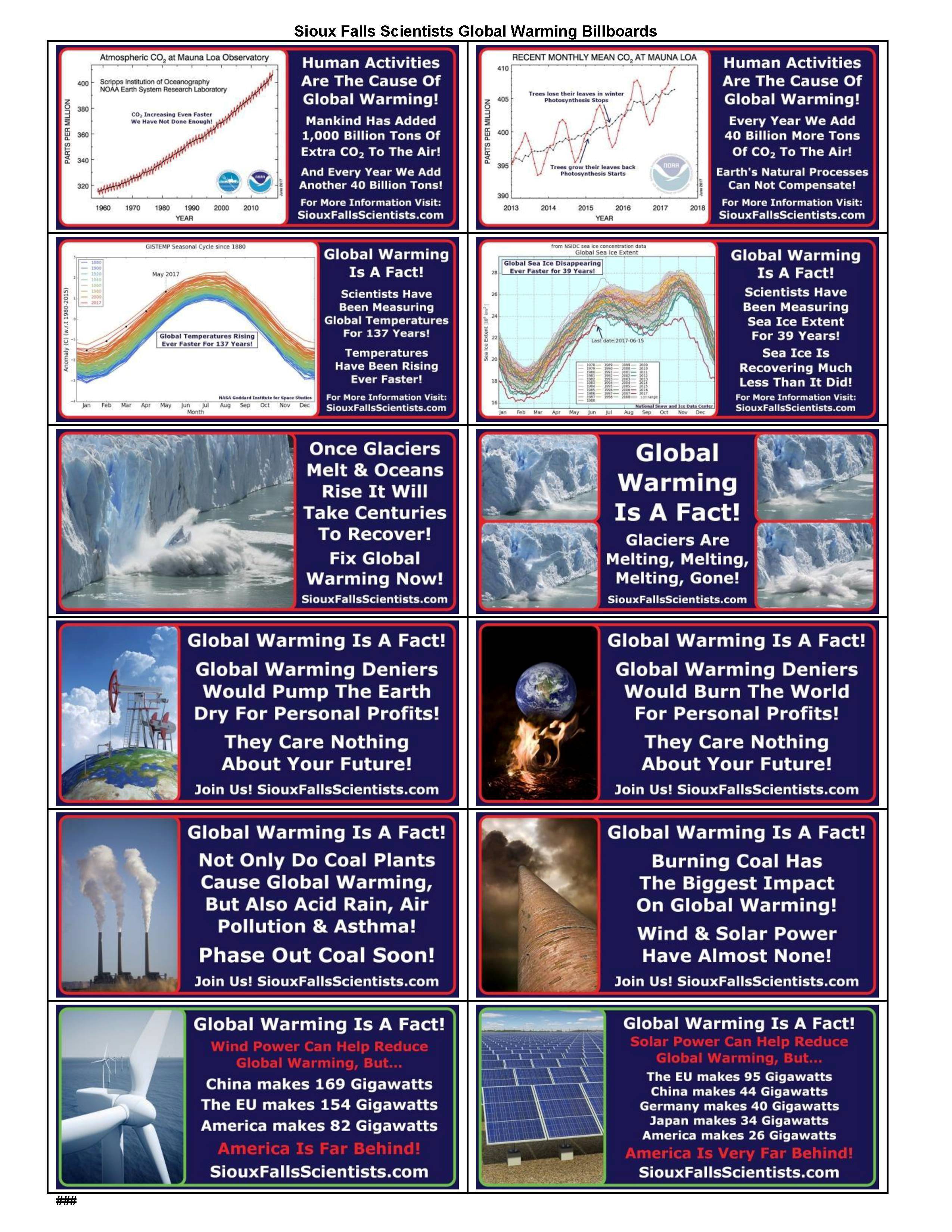 (Sioux Falls, South Dakota; Tuesday, July 18, 2017) The Sioux Falls Scientists want to take a stand against the current Presidential administration’s denial of global warming. They will be presenting their case for the cause of global warming on their billboards and TV ads over the next 6 weeks. The billboards went up on July 17th on West 12th Street and S Cliff Ave, and the TV Ads on Keloland will start on July 31st. The billboards will be up for 4 to 6 weeks, while the TV ads will run for 2 weeks on Keloland TV on both 6 PM and 10 PM news.

Dale Hemming, the President of Sioux Falls Freethinkers, gave a description of the billboard campaign’s main intent. “The major cause of the global warming we are experiencing is our burning of fossil fuels. The fossil fuels release additional CO2, which is a potent greenhouse gas, into the atmosphere. CO2 traps the sun’s heat in our atmosphere rather that letting much of it escape back into outer space. Photosynthesis by the northern forests used to be able to process all the CO2, using the carbon for tree growth and releasing oxygen for us to breathe. But the forests could not handle the extra 1,000 billion tons of CO2 that humans have dumped in the past into the atmosphere, and the extra 40 billion tons of CO2 humans are now dumping every year into the atmosphere.”

Hemming also added, “As CO2, global temperature, and sea ice charts show, all the talk about how much progress we’re making to solve this problem are just talk: CO2, rising temperatures, and disappearing sea ice continue to increase ever faster. The United States has fallen far behind China by 52% and the European Union by 73% in green energy sources such as wind power and solar energy.” Hemming continued, “I am concerned with recent desires for wanting to cut spending on science, burn more coal, and that the United States has been withdrawn from the Paris Climate Change agreement. Our future may become bleak and we will have to pay an enormous price for this megalomaniac drive for popularity with the ignorant.”