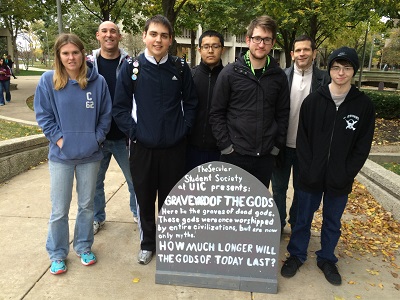 In September of this year, the Freedom From Religion Foundation Chicago Metropolitan Chapter approached the Secular Student Society of the University of Illinois Chicago to inquire into their possible interest in sponsoring an on-campus display of a “Graveyard of Gods” for this year’s Halloween season.

The idea for this specific display was first masterminded two years ago by the secular student group known as the Atheists, Humanists and Agnostics (AHA) of the University of Wisconsin in Madison.  Its educational purpose is to showcase the many gods that have been worshiped throughout history, but are now long forgotten.  It also poses a question about the gods currently worshiped in modern culture, and how long it might be before they too are “deceased.”  The UW Madison display is comprised of a whopping 250 gravestones!

The UIC Secular Student Society enthusiastically agreed to sponsor their own “Graveyard of Gods” and had received permission from university administration to erect their display during Halloween week.  The FFRFMCC assisted with this project by donating the construction materials and fabricating the gravestones (26 in all), while the students applied the names of mythological gods and set up the display daily in the “Quad” area of the university.  One of the gravestones included three different names — Jehovah, Yahweh and Allah — which are all used to identify the Abrahamic god from the religious traditions of Christianity, Judaism and Islam.  Those three names were then followed by a question mark.  The objective of the display is to inject critical thinking and encourage individuals (both believers and non-believers) to give some thought to what many rationalists already consider an inevitable conclusion — that all gods and religions sooner or later have their day.

Another purpose of the display is to generate constructive and respectful discourse on the subject of religion.  And as it turned out, one person or group at the university was not welcoming of the “Graveyard of Gods.”  After a couple of days of the display being on campus, a large 18″ x 24″ piece of poster board was left anonymously at the display with the following message handwritten on it:

While your aim with your graveyard was to touch lightheartedly on Religion and “God”, it crossed lines on a cultural level. To have a gravestone marked with Allah and Yahweh when UIC has a large and prominent Muslim and Jewish student population is not only ignorant, but also anti–semitic and Islamophobic. Religion has important intersections with cultural and ethnic identity, so think before doing something like this again. You’re not original, nor are you edgy.”

I had asked the Secular Student Society if they had issued a response to this message.  What they did was to post a follow-up note within the display suggesting that anyone with concerns or comments should contact them directly through their group’s e-mail, in order to encourage a dialogue.  At the time of this writing, no one had reached out to the group, not even the ones who left the criticizing message but chose not to reveal themselves.

The FFRFMCC, though not acting as a named sponsor of the display, has some feelings of our own regarding the content of the message received by the UIC Secular Student Society.  The accusation of the display being “anti-Semitic” and “Islamophobic,” in our opinion, shows the ignorance of the messenger(s).  That ignorance being a lack of knowledge regarding religious history, in that the three names appearing on the “Abrahamic god” gravestone are all in reference to the same god, which have simply been given different names by separate religious traditions.  But what they are inferring is that this display is offensive to people who believe in that particular god — that we should not be challenging the dogmatic beliefs of those who believe in this one god.

This is ironic considering that each of those three religious traditions, while theoretically believing in the same god, all follow completely different doctrines.  In a nutshell, they are saying just the fact we question the existence of their god is an offense to their beliefs, as diversified as those beliefs might be.  We are being told our feelings should be kept silent because it offends certain people.  Yes, we agree that religion has important intersections with cultural and ethnic identify.  But religion is an ideology, not a physical trait and not something that is necessarily permanently ingrained in one’s cultural and ethnic identity.  It is also an ideology that many non-theists consider to be an impediment to human progress.

But their critique of the “Graveyard” raises some obvious questions:

If the inference from this display, or others like it, is truly bothersome to certain people, it would stand to reason it must be because they are not secure in their own belief system.  Those of dogmatic belief are often fearful of having their religion questioned in the public discourse.  Should this be surprising to us?

If someone were to tell non-believers (as is often the case from people of religious faith) they are absolutely certain a god exists and that we will go to hell for not believing, it is not likely their words would shake our disbelief in that god.  Nor would it offend us.  And why should it?  If we truly don’t believe, such words are meaningless to us.  On the same front, if a person is secure enough in their religious beliefs, then having someone else express the opinion that no god exists should not necessarily shake their deeply held belief in that god.  Nor should it bother or offend them.  But if it helps to encourage them to think more critically about the reasons why they believe in their god, then we have made some progress.

Colleges and universities should be considered halls of knowledge and thought, and any attempt to silence the free expression of students voiced on the grounds of a college university is antithetical to the entire purpose of institutions of higher education.  There is nothing hateful or disrespectful about a “Graveyard of Gods” display.  It is designed to promote thought.  Therefore, it should not be considered anti-Semitic, Islamophobic, anti-Christian, or even anti-religious.  It simply states a logical hypothesis — one that even every person of religious faith should consider as a possibility.  And it is becoming apparent that more are considering this possibility, as the latest Pew Research Center study on Religion & Public Life indicates a significant drop in the number of people who claim certainty that a god exists.

The Secular Student Society of UIC plans to exhibit their “Graveyard of Gods” again next Halloween season, and perhaps those who felt it necessary to offer a negative critique of the display will then have the courage to not only identify themselves, but also engage in a constructive dialogue on the subject.

The attached photo features members of the UIC Secular Student Society, along with me and fellow FFRFMCC Board member Joel Frazin all standing next to the descriptive headstone.

**Spelling mistakes contained within the note are not an oversight, they reflect the original letter.  Let us hope the writer is not an English major!

Thanks again to Tom for allowing this article to be re-posted.