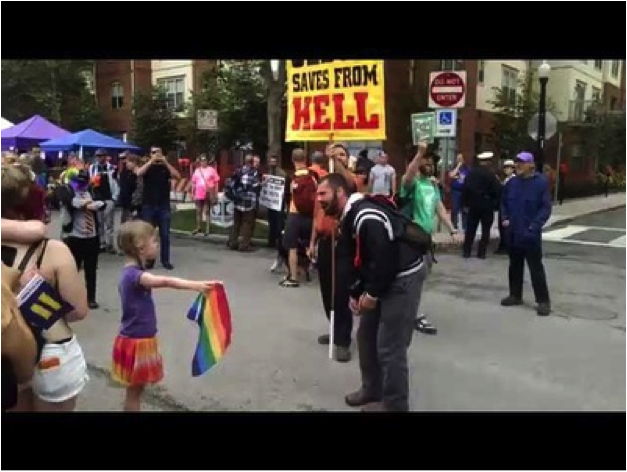 Last year, Columbus CoR participated in their first Comfest, which is a nickname for the famous Columbus Community Festival that has been a progressive communal festival since 1972. United CoR helped to sponsor Columbus CoR with some funds and a banner for the festival—without this help it would not have been possible.  Many of the Columbus CoR member groups provided volunteers and everyone had a great time.

The tabling was so successful that Columbus CoR participated in this year’s Comfest from June 26th through 28th. An abundance of volunteers for our table came from Central Ohio Gay Atheists, Central Ohio United Non-Theists and Omnipresent Atheists. Columbus CoR raised money through groups and online in order to have an even better booth than last year with more fun things to pass out.

We talked to a couple hundred people, including veterans, retired folks, and young families. We had over 90 people sign up on our email list as well. The response was very positive and we are happy to do it again next year if we get chosen to have the booth again. People really liked some of our “Ask-An-Atheist”, Flying Spaghetti Monster, and Darwin Fish Stickers as well as our Get Out of Hell Free Cards—we definitely know we are going to keep those around next year.

It was a great weekend for Columbus CoR, minus the festival getting shut down early on Friday due to rain and it being muddy, windy, and chilly on Saturday, but Sunday was perfect weather with no rain or cold temperature. Columbus CoR was at Comfest for a total of 33 hours hours and 18 people volunteered for the booth donating over 100 hours of their time to Columbus CoR.

By the way, the photograph is of the first grade student—Zea Bowling—who made her own protest against an LGBTQ hate preacher at the ComFest. You can read more about that story here, or watch the YouTube video that went viral.