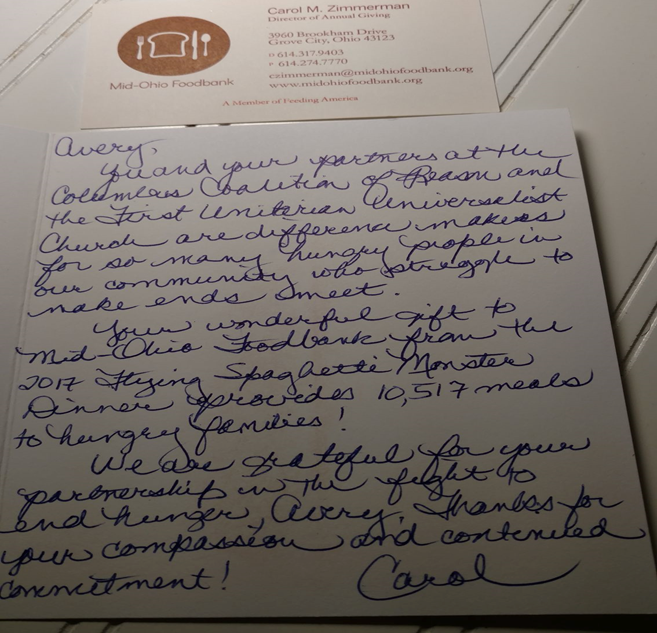 All Columbus CoR member groups are invited to participate on Third Thursday events every other month. Blood donation at the Red Cross is followed by dinner at a local restaurant. Central Ohio United Non-Theists (COUNT) collects and reports results to Foundation Beyond Belief to publicize non-theist charitable efforts and improve the reputations of humanists and atheists. Thirty nine life-saving units were collected from 12 Columbus CoR donors from January 2017 to date. RSVP with the Humanist Community of Central Ohio (HCCO) or COUNT for March 15th. We will also donate on May 17th (third Thursdays every other month).

Note: If you donate on a different day, please RSVP on Meetup and add a note stating the date and number of units and we will include your donation in our report.

COUNT and HCCO, both Gold/level 3 Beyond Belief Network (BBN) teams for 2016 and 2017 and already at Bronze/level 1 for 2018, and the Secular Student Alliance (SSA) at The Ohio State University (OSU), the current BBN Team of the Month, have together worked 818.5 hours at the Van Buren Dr. homeless shelter since January 2015. On the second or third Tuesday of each month volunteers help serve dinner and clean-up. Sixteen of 82 Columbus CoR volunteers have been recognized as “Handful” volunteers, having worked at least five times at the shelter.

COUNT will be working at the Columbus Ronald McDonald House on April 1 (no fooling!), May 6 and June 3 1st Sunday events. Some COUNT volunteers work the 9:00 AM – 1:00 PM shift and some work the 1:00 PM – 5:00 PM shift. Join us for whichever shift suits you. Members of Columbus CoR groups volunteer via COUNT to serve as Housewarmers, restocking “hotel” rooms and otherwise assisting guests. Volunteers may choose to help at the front desk if they like.

Twenty COUNT volunteers have worked 1,130.5 hours there from May, 2013 through February 2018. Last month, Dave, Andrew and Jess completed the last of eight “no-sew” blankets that COUNT then donated for distribution to Ronald McDonald House guests.

The National Day of Reason is held on the first Thursday in May each year as a counter to the National Day of Prayer. Columbus CoR groups are celebrating with a Potluck on Saturday May 5 from 1:00 – 4:00 PM at the Actual Brewing Company, 655 N. James Rd. RSVP on Facebook or on Meetup with Central Ohio Gay Atheists COGA), COUNT or OA. We are recruiting one or two volunteers from each member group to help with this event; e mail [email protected] to volunteer.

This event will benefit the Mid-Ohio Foodbank again this year as did the recent Brewery Fundraiser at Land Grant Brewing Company which raised $51.76 and collected an estimated 72 lbs of food. Columbus CoR groups have already raised $14,197.22 and collected 1,846 lbs of food since 2012 for the food bank.

HCCO, COUNT, COGA, OA, and SSA at OSU are members of the Columbus Coalition of Reason.