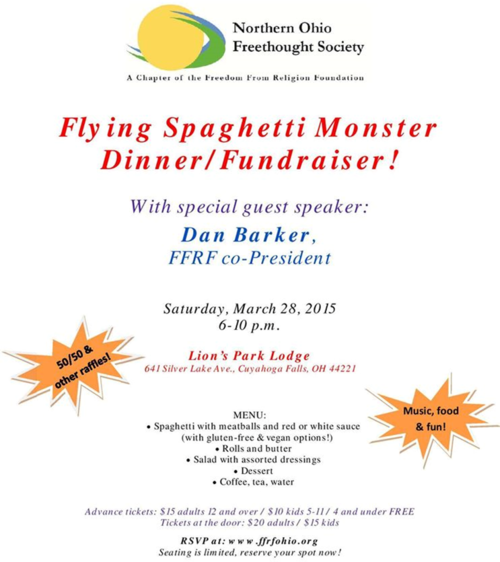 Outdoor events and opportunities to learn and help!

Join Central Ohio United Non-Theists (COUNT) for an early spring clean up of the Humanist Community of Central Ohio (HCCO) stretch of highway located on the north and south sides of 270 between the route 71 and 23 exits. Meet in the Westerville Aldi parking lot on March 28th where Event Host Christina McDuffie will conduct safety training and get consent forms signed. Participants will go out for lunch afterwards. This is the third year that COUNT and HCCO have worked together on this project. RSVP on either the HCCO or COUNT Meetup event.

David Scott is a Columbus resident who has served as the elected president of the national Sierra Club since May 2013. He was first elected to the Sierra Club's national board of directors in 2009 – over 500,000 club members receive ballots. From 2010 to 2013 he served as vice president, the board member responsible for the organization's conservation advocacy work, including its Beyond Fossil Fuels campaigns and Our Wild America campaign, focused on lands and wildlife protection. Prior to being elected to the national board, he served in volunteer leadership roles including vice president for the Midwestern US.

David attended Oberlin College and OSU's Moritz College of Law, and he has worked in civil rights and poverty law, starting as a Legal Aid lawyer in Appalachia. He currently devotes most of his time to environmental work. With over 2.4 million members and supporters, the 122-year old Sierra Club is the nation's oldest and largest grassroots environmental organization.

The talk is titled "Climate Activism: Where We've Been, Where We Are, Where We Need to Get To". RSVP on Meetup and have pizza before the talk at 12:30.

COUNT will hold their first "team" shelter event on April 14th. COUNT started serving meals at the Van Buren Drive shelter in January and has had three successful events already. For events in January – March, COUNT members signed up as individuals, competing for 5-7 sometimes scarce volunteer slots. Since then, an additional dining room has opened in the facility, increasing the number of volunteer slots to 14. COUNT's March 22nd event may already be fully staffed. Shifts are from 5:30 – 8:00 PM (repeat volunteers can start at 6:00). Event Host Christina McDuffie has arranged to regularily reserve the entire shift for COUNT volunteers on 2nd Tuesdays starting April 14th. RSVP soon to join the team!

Columbus CoR invites you to celebrate the National Day of Reason at a picnic on Saturday May 2 at Highbanks Metro Park. The picnic is scheduled for 1:30 – 4:30 PM at the Mansion Shelter. Details will be available soon on Meetup.com.