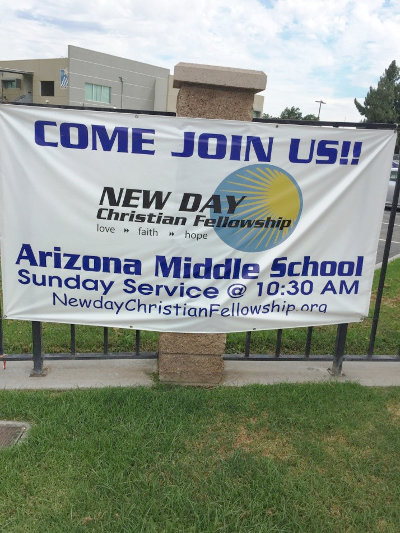 In Southern California, what’s appropriate and legal signage when a church rents space at a public school? Jan Goings reports.

For many months, I had seen this banner which was placed on the fence in front of a public-funded school in my neighborhood. This banner was visible for many months, and it bugged me every time I drove by the school. I thought this sign might give the public the perception that a public school was endorsing a Christian church or that this public school was a religious school. I contacted the Freedom From Religion Foundation (FFRF), and learned that it was permissible for the church to place the banner there during the couple of hours on Sundays when the church rented the school facilities, but the banner was there all the time so I decided to ask the FFRF to help in getting the banner removed.

With the help of FFRF, after several contacts with the Alvord School District of Riverside and the Arizona Middle School, the banner has been removed. Here are links to one correspondence and another correspondence to the school district. The Inland Empire Atheists and Agnostics will be hosting another community booth on September 8th in Redlands, CA from 5 to 9pm, and we’d love to talk with people about our experiences with the churches who meet in the schools.