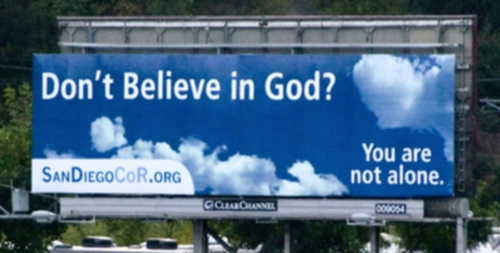 Ah, swine flu. Or, maybe not. Maybe just regular flu. Either way, I’m not going to church today. It’s as good a time as any to spend some time with the Other Side, the crowd that doesn’t do church because they don’t believe in God. Or rather, they don’t do the part of church that involves worshipping a personal deity. The rest of it, I found, they might be okay with.

“Organizing atheists is like herding cats,” goes the old saying. Like cats, the thinking runs, atheists tend to be independent sorts, resistant to group mentalities. Further, it’s tricky to organize people around a denial — once you’ve agreed that there’s no God, what is left to do? And what’s the point of doing it?

Well, for starters, what about providing refuge and support for an ostracized minority? Jeff Archer is the president of the Atheist Coalition of San Diego, and in 2006 he wrote, “In the U.S., every day is a struggle for atheists. Despite 93 percent of the membership of the National Academy of Science being atheist and numerous great actors, philosophers, artists, and writers also, we are looked down upon by most U.S. citizens, many of whom are minuscule compared to us in the area of intellect.” Apparently, intellectual excellence is cold comfort. There is still that basic human desire to belong. That explains the billboard.

The billboard faces the 8 West, just before the Lake Murray exit. Passing motorists see blue sky, fluffy clouds, and the words, “Don’t believe in God? You are not alone. SanDiegoCoR.org.” Maybe it’s because I spend so much time attending various churches, but my first thought was that this was a clever religious outreach. A gentle assurance to the unbeliever that he or she was not alone in an unfeeling universe, that “bidden or not bidden, God is present.” San Diego CoR — Church of Recovery?

The truth was more earnest: “Nontheists sometimes don’t realize there’s a community out there for them,” says Fred Edwords, national director of the United Coalition of Reason. “We hope this will serve as a beacon.” Adds San Diego coordinator Debbie Skomer, “We’re choosing to be as open about our values as you are.” It’s the billboard as secular steeple.

An essay by coalition member Howard Jones stresses, “We aren’t proselytizing; we don’t expect to ‘convert’ any believers.” But the coalition is made up of nine member organizations, including the aforementioned Atheist Coalition of San Diego, which seeks, among other things, “to promote atheism…presenting it as a worthwhile, life-affirming, and wholesome point of view.” And Skomer grants that one of the goals of the billboard is to help member organizations grow their memberships. Even if you’re not seeking converts, when you’ve found the truth, you want to share it.

Another coalition member group, the Humanist Association of San Diego, retains the services of “San Diego’s only American Humanist certified Humanist Celebrant for Weddings, Memorials, and other rites of passage rituals.” Someone to preside over significant moments, the way a priest is there to baptize and bury. Not the same way, of course, but it’s hard to miss the quasi-religious connotation of “celebrant.”

There are regular gatherings. On Sunday, November 22, the Humanist Fellowship of San Diego will be attending a lecture at the San Diego Central Library given by USD professor Dennis Rohatyn on Voltaire and the Revolt Against Reason. And the day before, Voltaire gets his own holiday. (The gatherings, says Skomer, are part of the reason behind the coalition. “Recently, the members welcomed Sean Faircloth, executive director for the Secular Coalition for America, the national lobby representing the interests of nontheistic Americans. Typically, a visit like this would have been hosted by only one organization and advertised only to its members. By networking, the groups can have a more meaningful impact in the community.”)

The coalition’s local event calendar also includes birthday memorials for great atheists who have gone before us: ex-Catholic and Nobel Prize–winner Marie Curie, Mr. Cosmos Carl Sagan. The tribute to Sagan includes this, which reads like the photo-negative account of a saint’s final perseverance in the face of death: “Ann Druyan, in the epilogue to Sagan’s last book, Billions and Billions: Thoughts on Life and Death at the Brink of the Millennium (published posthumously in 1997), gives a moving account of Carl’s last days: ‘Contrary to the fantasies of the fundamentalists, there was no deathbed conversion, no last-minute refuge taken in a comforting vision of a heaven or an afterlife. For Carl, what mattered most was what was true, not merely what would make us feel better. Even at this moment when anyone would be forgiven for turning away from the reality of our situation, Carl was unflinching. As we looked deeply into each other’s eyes, it was with a shared conviction that our wondrous life together was ending forever.’”

The billboard went up November 11 and will stay up for a month. There has already been positive response. “To finally enjoy a community of like-minded people!” writes new member Wendy at the website for the San Diego New Atheists. New member Raul joins in, “I’ve been skeptical of the ‘Invisible Man’ in the sky who I had better do what he says or there’s a special place in Hell for me that he will send me (…but he loves me!). I saw the SanDiegoCoR.org sign the day it came out and want to make friends.” Skomer says she has received 58 positive comments so far through the CoR website, including this one: “I am an educated, generous, and compassionate non-theist who has ‘led a good life and contributed my share to society.’ I am often frustrated by the dominance of religious dogma in our everyday lives and by the lack of outlets for people like me to express their love and compassion for others without having to pretend to believe in something they don’t…. Please keep up the good work.”