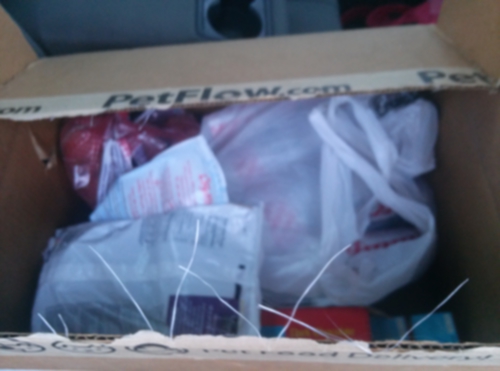 On November 18th, a good friend of mine told me that she was having some trouble feeding her family. While discussing raiding our pantries with my husband, I realized, "Hey! I know a group of compassionate, kick-ass people who'd love to help".

On the evening of November 19th, I took about a week's worth of groceries donated by a few members of my group. On the 20th, I was able to go back with about another week's food.

Let me tell you a little about my friend. I will change her name for privacy. I worked with Cindy for a few years. She had a good job, a husband and three lovely daughters. 2013 has been very tough on her. Her husband was in an at-fault car accident at work, so was fired, but was also severely injured. Cindy took off three months to help him. All of daughters are in college and living with Cindy; one has a baby.

While her husband was injured, he became abusive. He was already facing charges because of the accident at work. He was finally arraigned about three months ago. About a month later, Cindy was unwell herself, but was out of sick time, vacation time, and unpaid leave, so she was laid off.

She is slowly beginning to put her life back together, and my group of lovely, caring Roswatheists had a hand in it. So I'm letting you all know because we don't get to hear all of the positive things our atheist communities do.  I know that Roswatheists isn't a unique bunch of individuals. Atheist groups across the US and the world get together in times of crisis and need, but we don't use fucking bullhorns. In this case, I am using a bullhorn. Because of this group, Cindy and her children can at least eat until she figures out what to do next-whether that's food stamps or she is somehow able to get a job in the next little while or something else.

If you'd like to contribute please email to [email protected] or use PayPal to donate to that email address.