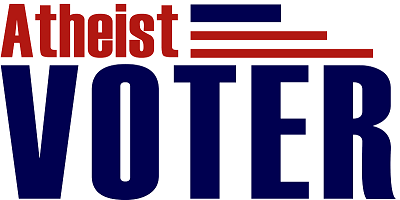 When the Family Leadership Summit held their meeting in Iowa this past July, they hadn’t anticipated the presence of atheist voters from two Iowa CoRs. They also hadn’t anticipated that Amanda Knief of American Atheists would be on hand to ask candidates such as Donald Trump a simple, yet powerful question: “Do you want the atheist vote, too?” With recent polls showing an increase in people who are open about their disbelief in deities, plus a rise in people who are unaffiliated with traditional religious groups, activists are making it clear that there is power in the ballot box for everyone’s voices.

There is a way for everyone to get involved just like Amanda has done, and to help “hold politicians accountable”: Atheist Voter.  Atheist Voter wants to build a network of volunteers across the country to help track candidates, host rallies and protests, and report on their activism.

It’s a simple thing that everyone can do: sign-up to Atheist Voter and receive information for when political candidates will be in your local area. Have someone film your interaction with a candidate by asking a question that Atheist Voter will provide you (such as “I’m an atheist. Do you want atheists like me to vote for you?” or “I am an atheist. Do you think that a business owner should be allowed to refuse to serve me because of their religious beliefs?”), and then post it up onto YouTube. Atheist Voter also has promotional literature, t-shirts and other items to help raise the visibility and normalize what it means to be an atheist, thereby changing attitudes and perceptions at the grassroots and national levels.

If you’d like to follow Atheist Voter, check out their Twitter feed (remember to watch for #AtheistVoter) and Facebook page for more information. You can also contact Nick Fish—National Program Director for American Atheists—at (908) 276-7300 (ext. 8) or Twitter to find out more about how you can be a direct volunteer to ask and film questions posed to candidates.