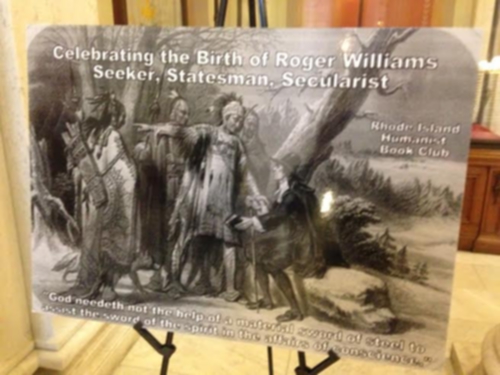 On Friday, November 21, the newly launched Rhode Island Coalition of Reason installed a Tree of Knowledge at the Rhode Island Statehouse. The RICoR tree is accompanied by a sign featuring the Robert G. Ingersoll quote, "Banish me from Eden when you will, but first let me eat of the fruit of the Tree of Knowledge."

Also that day, the Freedom from Religion Foundation installed a sign calling for reason to prevail at the winter solstice season and proclaiming, "There are no gods, no devils, no angels, no heaven or hell. There is only our natural world. Religion is but myth & superstition that hardens hearts & enslaves minds."

On Wednesday, November 26, the Rhode Island Humanist Book Club installed a sign featuring the Williams quote, "God needth not a material sword of steel to assist the sword of the spirit in the affairs of conscience." The quote presents Williams in all of his complexity as a man of faith who championed "soul liberty" and opposed the "monstrous partiality" of sectarian dogma.

Today the Humanists of Rhode Island installed it's display inaugurating "the season to celebrate the birth of Roger Williams (born December 21, 1603) & separation of church and state." It brings the total number of secular displays to five and is the third to acknowledge the role of Roger Williams in Rhode Island's unique secular heritage.

Secular displays have begun proliferating in response to the recent tradition of inviting international displays of nativity scenes on the second floor. It is often presumed that these displays are related to the annual controversy over calling the Christmas tree a "holiday tree." The secular displays, however, are confined to the second floor. The statehouse tree is located on the main rotunda, where only Christmas decorations and a single menorah (chanukkia) are permitted.