About James A. Haught 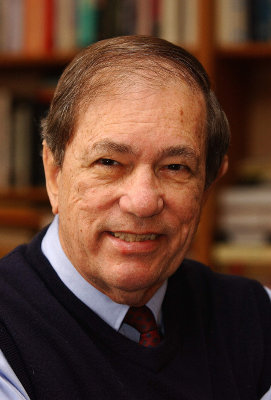 James A. Haught is longtime editor of West Virginia’s largest newspaper, The Charleston Gazette-Mail, where he has won two dozen national newswriting awards. He is also a prolific and important voice in the nontheist movement. having won 21 national newswriting awards. He is author of 11 books, 120 magazine essays, and 50 columns syndicated nationally. Thirty of his columns were distributed by national syndicates. He also is a senior editor of Free Inquiry magazine.

He was born in 1932 in a small West Virginia farm town that had no electricity or paved streets. He graduated from a rural high school with 13 students in the senior class. He came to Charleston, worked as a delivery boy, then became a teen-age apprentice printer at the Charleston Daily Mail in 1951. Developing a yen to be a reporter, he volunteered to work without pay in the Daily Mail newsroom on his days off, to learn the trade. This arrangement continued several months, until The Charleston Gazette offered a full-time news job in 1953. He has been at the Gazette ever since – except for a few months in 1959 when he was press aide to Sen. Robert Byrd.

During his six decades in newspaper life, he has been police reporter, religion columnist, feature writer and night city editor. Then he was investigative reporter for 13 years, and his work led to several corruption convictions. In 1983 he was named associate editor, and in 1992 he became editor. He is in Who’s Who in America, Who’s Who in the World, Contemporary Authors, and 2000 Outstanding Intellectuals of the 21st Century.