In the previous article, we asked the question why many people think religion causes believers to be compassionate and brotherly. However, historical records give a different view when religious zeal causes followers to do unspeakable things in the name of their religious belief.

After killing Muslims in Crusades and Jews in massacres, Christians began killing fellow Christians who deviated from official dogma.

One deviant group was the Cathari, or Albigenses, so named because they centered around Albi, France. In 1208, Pope Innocent III declared an “internal crusade” to exterminate Albigenses. An army of 20,000 captured the city of Beziers. When commanders asked the papal legate how to distinguish the faithful from heretics among captives, he replied: “Kill them all. God will know his own.” It was done. 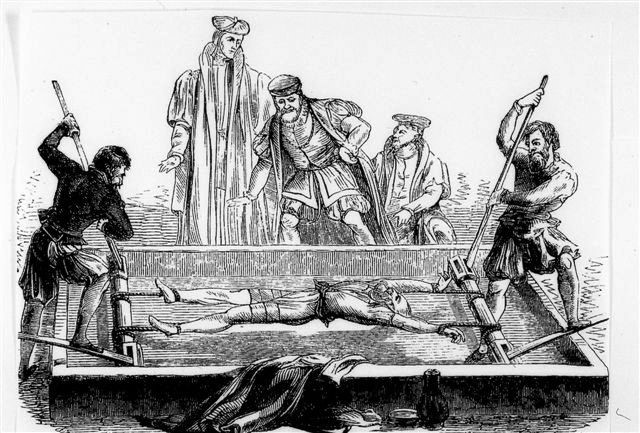 Various other internal crusades were fought against sects following unapproved beliefs. Finally, the Holy Inquisition was mobilized to ferret out heretics and execute them. Pope Innocent IV authorized torture in 1252 and Inquisition dungeons became places of horror. Screaming victims usually confessed to stop the torment. Then they were led in holy processions to be burned at the stake.

The Inquisition had three phases: the medieval pursuit and execution of nonconformists – then the Spanish Inquisition in the 1400s, mostly against secret Jews and Muslims – and finally the Roman Inquisition, after the Reformation, which purged hidden Protestants. Altogether, uncountable thousands were put to death. 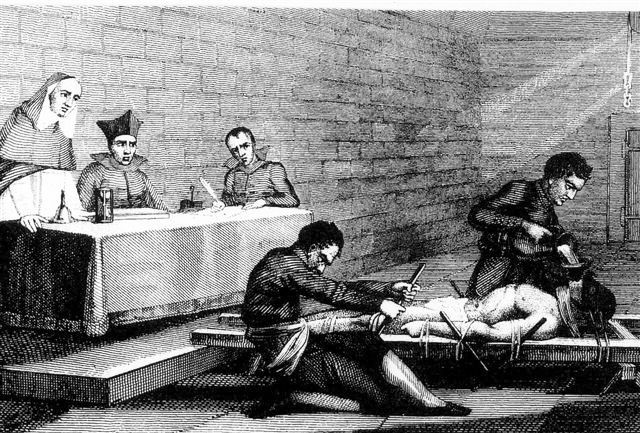 During the Roman period, scientist-philosopher Giordano Bruno was burned at the stake in 1600 for teaching that planets orbit the sun. Scientist Galileo barely escaped the same fate for the same reason.

Spaniards brought the Inquisition to American colonies to pursue natives who returned to tribal beliefs. Some 879 heresy trials were recorded in Mexico in the 1500s.

After the Reformation, some Protestants developed their own form of Inquisition. Physician Michael Servetus, who discovered the pulmonary circulation of blood, was burned at the stake by John Calvin in Geneva in 1553 for doubting the Trinity.

(Teens at my Unitarian church hold a yearly Michael Servetus Weenie Roast in his honor.)

In 1484, Pope Innocent VIII issued an infallible bull asserting that many people “abandon themselves to devils, incubi and succubi, and by their incantations, spells, conjurations and other accursed charms and crafts, enormities and horrid offenses, have slain infants yet in the mother’s womb, as also the offspring of cattle, have blasted the produce of the earth, the grapes of the vine, the fruits of the trees, nay, men and women, beasts of burden…. They hinder men from performing the sexual act and women from conceiving.”

By this time, the Holy Inquisition had branched into finding and killing witches, following the Bible’s mandate: “Thou shalt not suffer a witch to live.” The witch-hunts became a ghastly phase of history, with uncountable victims. Medieval historian Anne Barstow estimates the total at 100,000 executed. 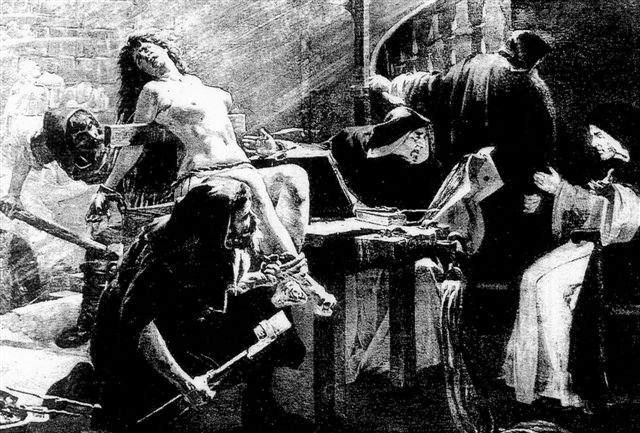 Accused women were stripped by inquisitor priests who searched their bodies for “witches marks” or “witches teats” where they allegedly suckled demons. They were tortured into confessing that they copulated with Satan, changed into animals, blighted crops, made themselves invisible, or flew through the sky. They also were forced to name alleged fellow witches – who were arrested and given the same treatment.

In 1583 in Vienna, a 16-year-old girl suffered stomach cramps. Jesuit priests exorcized her for eight weeks, then announced that they had expelled 12,652 demons from her—demons that her grandmother had kept as flies in glass jars. The grandmother was tortured into confessing that she had sex with Satan, and was burned at the stake.

“In June of 1510, sixty-four women and men were burned at the stake in Val Camonica, Italy, for causing drought and fires and for harming people, animals and land.

“In July of 1518, sixty women and men were burned at the stake in Breto, Italy, for triggering thunder and lightning and for causing sickness and death of nearly 200 people.

“In June of 1582, the wife of an English sawyer named Alice Glosscock from the town of Chelmsford was stripped naked and her body searched for ‘the marks of a witch,’ which were found, leading to her conviction and execution.” 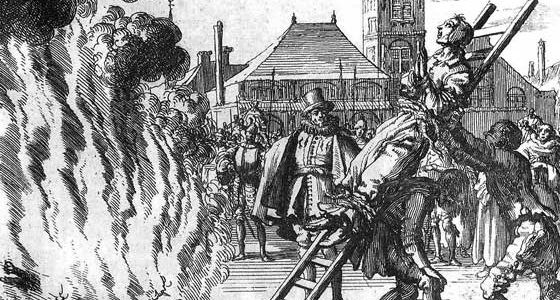 “The Church… gathered up its halters, thumbscrews and firebrands, and set about its holy work in earnest. She worked hard at it night and day during nine centuries and imprisoned, tortured, hanged and burned whole hordes and armies of witches, and washed the Christian world clean with their foul blood. Then it was discovered that there was no such thing as witches, and never had been. One does not know whether to laugh or to cry.”

Muhammad, who claimed to hear messages from the Angel Jibriel (Gabriel), roused followers who became his conquering army. He fought in nine battles and ordered others. His new faith of Islam spawned century after century of warfare.

After Muhammad’s death in 632, successor caliphs launched many holy wars – first against apostate tribes who seceded after the prophet died, then against neighboring lands. Fanatical Arabic armies spread the religion to Syria, Iraq, Palestine, Egypt and Persia – then eastward to India and westward across North Africa to Spain. The Muslim tide finally was halted in a 732 battle at Tours, France.

Splinter groups caused endless uprisings. Shi’ites, who thought Muhammad’s son-in-law Ali should have become caliph, fought doomed wars against the Sunni majority. Kharijiis, a splinter of Shi’ites, fought savagely for centuries as puritanical terrorists until they became nearly extinct. Ultra-fanatical Azaariqis decreed death to all “sinners” and their families.

Assassins were a clique of suicide volunteers who sneaked past guards and stabbed Sunni caliphs – causing some other Sunni leaders to wear armor under their robes.

In the 1700s, Muhammad al-Wahhab preached that Islam had been corrupted, so he raised troops who slaughtered fellow Muslims. Wahabbis arose again in the early 1900s as Muslim Brothers.

“From 1745 to 1934,” historian Daniel Pipes wrote, “virtually every battle the Wahhabis fought was against Muslim enemies.”

In 1804, Nigerian holy man Usman dan Fodio declared a jihad that killed thousands and toppled the Sultan of Gobir. In 1854, Mali holy man Umar al-Hajj declared a jihad that killed many before it was suppressed. In the 1880s, holy man Muhammad Ahmad called himself the Madhi (divinely guided one) and waged a bloody jihad in the Nile Valley. His army finally was stopped by Sir Horatio Herbert Kitchener (with a young aide named [Sir] Winston Churchill) who used new Maxim guns to mow down 20,000 Mahdists in a single day.

This is the historic background – leading to modern Islamic terrorists and suicide volunteers now the worst cause of bloodshed in the 21st century.

After Jews were driven from their homeland by Romans two millennia ago, they scattered across Europe and elsewhere, struggling to survive. But the rise of Christianity made them outcasts, branded as “Christ-killers” – often forced to live in ghettos and wear “badges of shame,” often hated and killed.

Catholic priests and theologians denounced them as “vipers” and “slayers of the Lord.” Church liturgy cited the “perfidious Jews.” St. John Chrysostom wrote: “The Jews sacrifice their children to Satan…. They are worse than wild beasts…. The synagogue is a brothel, a den of scoundrels, the temple of demons.” 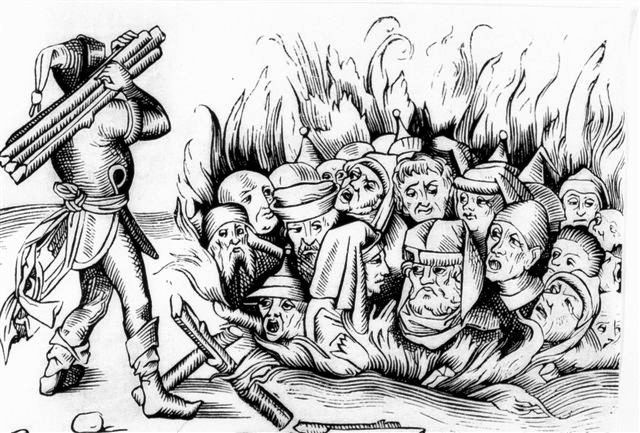 In 1144, an English boy was found dead, and rumors flew that he had been sacrificed by Jews who used his blood in heinous rituals. This “blood libel” rapidly spread across Europe, causing massacres of Jews in dozens of cities. Tales of child sacrifice – sometimes preached in large churches – sent murderous mobs raging into ghettos.

The Fourth Lateran Council in 1215 decreed that host wafers miraculous turn into the actual flesh of Jesus during Catholic mass. Soon rumors spread that Jews stole host wafers and drove nails through them to crucify Jesus again. This tale caused a wave of massacres that killed thousands. A Bavarian knight named Rindfliesch raised a brigade that raided ghettos to avenge the tortured host. He exterminated 146 communities in six months. 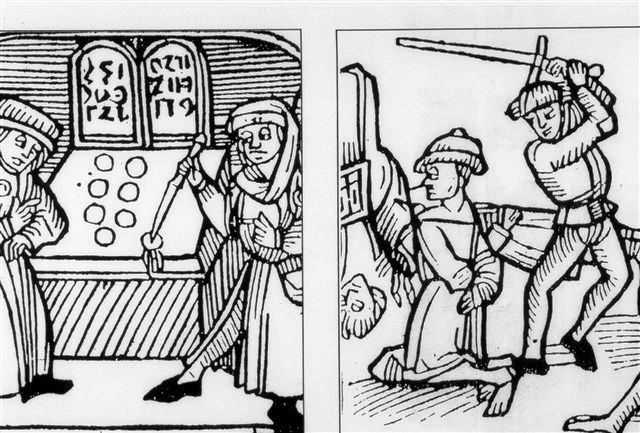 When the Black Death swept Europe in the 1300s, rumors spread that Jews had poisoned wells. Hysterical mobs massacred thousands of Jews in several countries.

Periods of toleration, followed by periods of slaughter, ensued for centuries. In the late 1800s, as mutiny grew against Russia’s czars, Kremlin secret police planted fake writings to rouse public hatred of Jews, to deflect anger away from the czars. Three waves of pogroms ensued, each worse than the last, sacking 530 villages and killing 60,000 Jews. 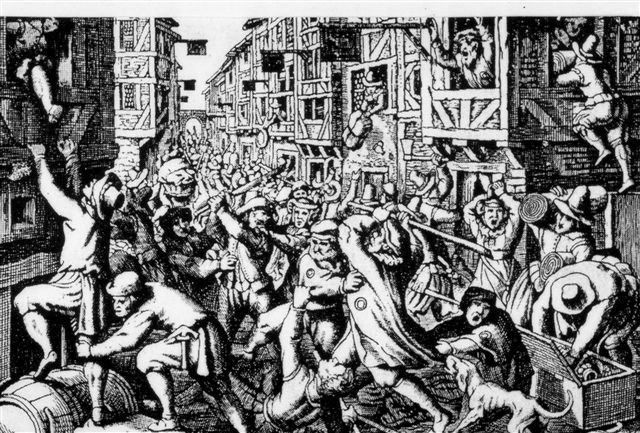 Historian Dagobert Runes estimated that 3.5 million Jews were killed during the long era of Christian persecution –which then set the stage for the Shoah…or what’s also known as the Nazi Holocaust…

Check back with us in two weeks to read Jim’s final instalment of Religious Horrors where he’ll talk about the Reformation Wars, slaughtering Anabaptists as well as modern-day death cults. If there are some topics you’d like Jim to consider writing about, email him at [email protected].