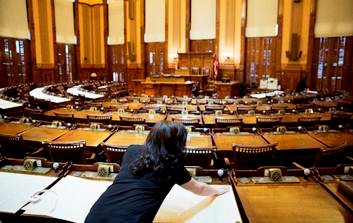 Debate continued during the legislative break over a returning bill that would forbid government from infringing on a person’s religious beliefs unless the government can prove a compelling interest. The proposed “Religious Freedom Restoration Act” would cover individuals, closely held companies like Hobby Lobby and religious organizations.

It easily passed the Senate but stalled in the House last year after a member of a committee added nondiscrimination language. Supporters of the bill said that would gut its protection for people acting on religious faith.

The bill’s sponsor state Sen. Josh McKoon spent the summer promoting the bill at various Georgia events. McKoon acknowledged at a recent panel that perception has become an issue but blamed people on both sides for “peddling scenarios with no basis in reality.”