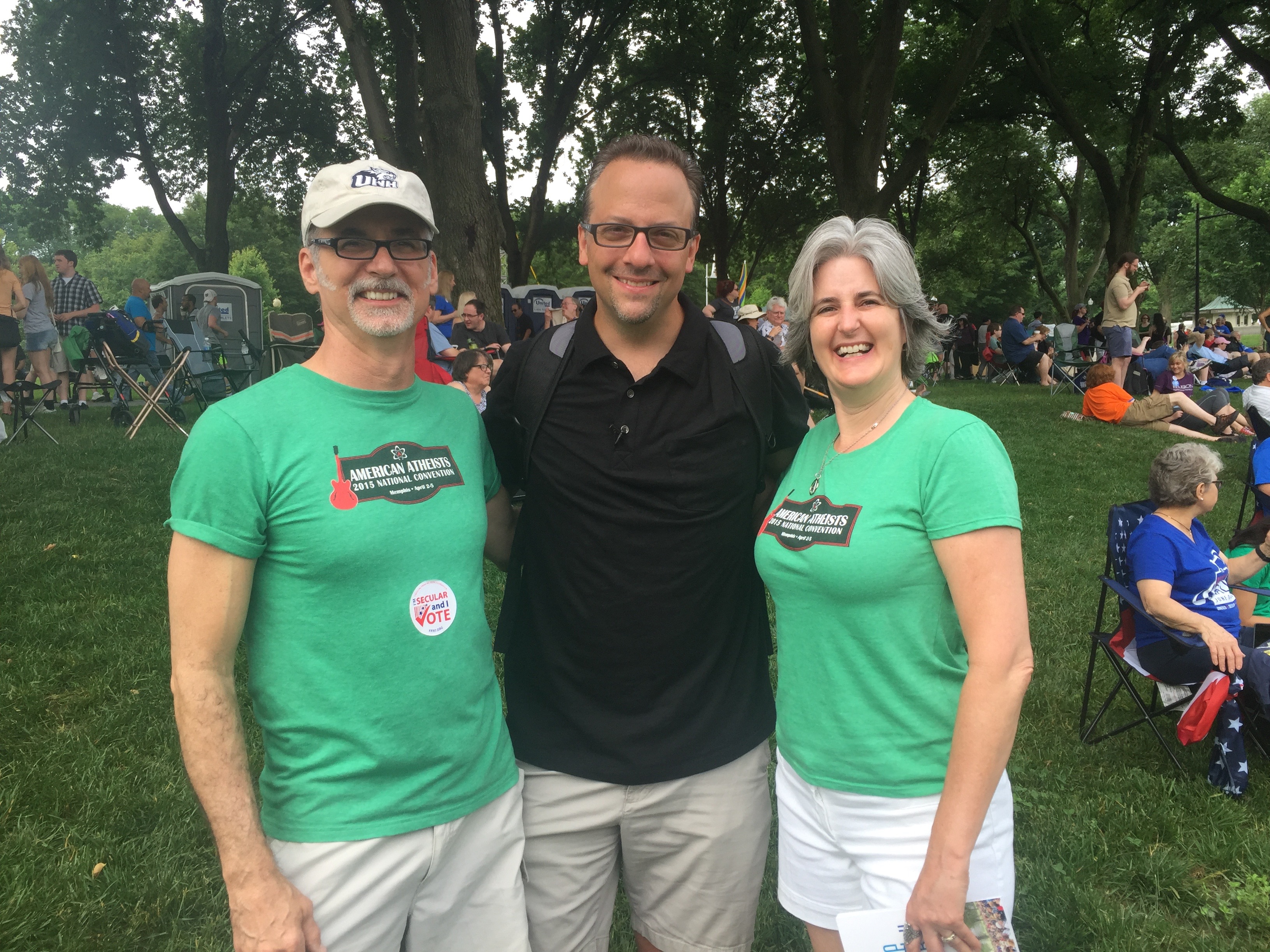 The Reason Rally is now three weeks behind us so we asked a number of the Connecticut CoR members for their thoughts:

“Dozens of people took up my offer to have their picture taken on their cell phone or camera with my poster.  The poster said, ‘I believe in an America where the separation of church and state is absolute.’ – John F. Kennedy.  What I most enjoyed was the opportunity to be in the inner sanctums of the Congress on Secular Advocacy Days, visiting with the key Legislative aides who advise the legislators, having received the full support, appointment setting, and information briefing from the Secular Coalition for America.  Yes, the legislative aides were interested, supportive, and revealing.  A really cool experience.” – Cary Shaw, President of the Humanists and Freethinkers of Fairfield County
“The speakers were terrific again this year as they were in 2012. What I enjoy the most, though, is the friendliness and the spirit of camaraderie amongst the rally-goers.  The enthusiasm and shared sense of purpose are infectious.  There is a great sense of “family” there, which must be even more meaningful to those who live in areas which are more hostile to atheists.  Even to those of us in blue states, the Rally fills our tanks so we are energized to build on the movement back home.” – Tanya Barrett, Former CT CoR Co-chairperson
“It was amazing to see so many like-minded people in one place again.  In many ways it was similar and in many ways different from the first Reason Rally.  I enjoyed both of them very much.  My favorite moment was getting to meet Seth Andrews (a.k.a. The Thinking Atheist) and thanking him for all of his work.  It was even more fun when we got home to see that we made his video (at 5:55 – https://www.youtube.com/watch?v=BwVH_lWldqQ)” – Elisabeth Brown, member of the Hartford Area Humanists.
“The t-shirt messages were awesome, and often hilarious, but mostly entertaining and inspiring!  I took about 25 pics of t-shirts before my phone died.” – John Levin, Board of Directors – Secular Coalition for America
“It was great to see so many Atheists, Humanists, and Freethinkers coming together in one location.  It was great to bump into old friends and make new ones.  It was great to talk briefly with Hemant Mehta (a.k.a. The Friendly Atheist) again.  He was the keynote speaker at our conference this past April.  It was great to bump into Vic Wang (Houston CoR, now FBB board member) again. The speakers and entertainers were awesome.  The sponsor tents were fabulous.  I particularly enjoyed the great hospitality of Jase and Susan (United CoR) and the opportunity to share my thoughts (https://www.youtube.com/watch?v=lRW54xJz8mg), meet some of my peers from other states, and to converse with Steve Rade.” – Pat McCann, CT CoR Co-chairperson