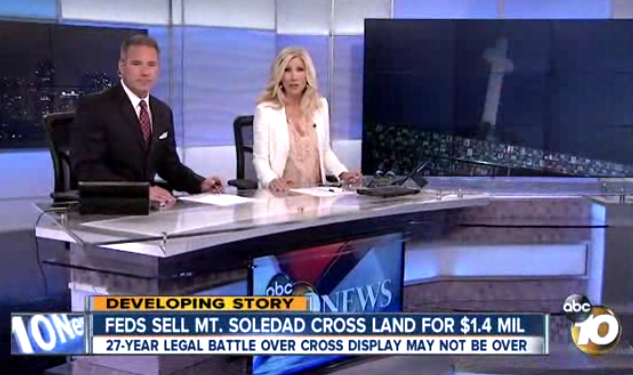 The land beneath the cross on Mt. Soledad in San Diego has been purchased by a private, nonprofit group for $1.4 million, a key step toward possibly ending a more than two-decade legal controversy over having a cross on public property.

The Mt. Soledad Memorial Assn. announced Monday that it had purchased the half-acre of property from the U.S. Department of Defense.

A provision in the defense authorization bill passed in December called for the federal government to sell the land beneath the cross to the memorial association, which has pledged to retain the cross as part of a war memorial.

The 43-foot cross was erected in 1954. More than 3,000 plaques honoring veterans are on walls surrounding the cross. The memorial association has long tended the cross and surrounding property, holding Memorial Day and Veterans Day events there.

Since the late 1980s, litigants, including the ACLU and Jewish War Veterans, have argued that the cross violates the constitutional separation of church and state. In 2006, the land was transferred from city ownership to the federal government.

The case is now with the U.S. 9th Circuit Court of Appeals, which in a previous ruling ordered the cross removed, although it remains unclear what effect the sale of the property by the Department of Defense will have. The U.S. Supreme Court has declined to hear the case.

Rep. Duncan Hunter (R-Alpine), a Marine veteran of Iraq and Afghanistan, hailed the sale as “a significant development that puts Mt. Soledad on solid legal footing and better ensures its preservation.  This is a landmark that has deep meaning to so many veterans and families.”

“We may be getting near the end [of the case], simply for legal and pragmatic reasons,” said McElroy, who filed the first case against the cross in 1988.

He said he wants to make sure that the government has relinquished all hold on the land in its sale to the memorial association. He noted that previous sales when the land was owned by the city of San Diego were struck down in the courts.

ACLU attorney David Loy, while reserving judgment until the sale contract is scrutinized, said that, “Certainly we are glad the government is trying to get out of the business of religion.”

The Mt. Soledad case could be influenced by a 2012 court decision that permitted a cross on National Park Service property in the Mojave Desert as long as the land was transferred to a veterans group.

But the Mojave cross was small, located in a remote location, and was erected by veterans. The Soledad cross, by comparison, is large, located in a major city, highly visible from Interstate 5 and was, for decades, a civic-supported effort.