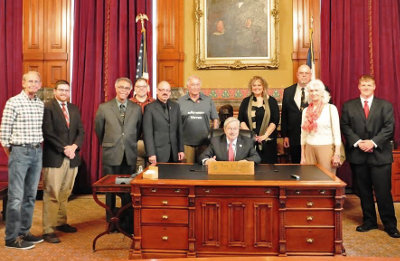 A few weeks before Iowa Governor Terry Branstad issued a proclamation for the “Iowa 99 County Bible Reading Marathon,” members of the East Iowa CoR and Central Iowa CoR had reason to celebrate, as Gov. Branstad issued a Day of Reason proclamation. East Iowa CoR also received local publicity after a synagogue had been vandalized with Christian messages, and a group of atheists assisted the synagogue with the clean-up.

In the hours following the tragic shooting at the Pulse nightclub in Orlando, members of the Central Iowa CoR participated in the local Iowa Pride parade. Using the theme of “Above Us Only Sky,” the LGBTQ+ supporters showed their solidarity with LGBTQ+ communities around the world, and represented the CoRs during the parade. Check out this video clip on UnitedCoR’s YouTube channel.