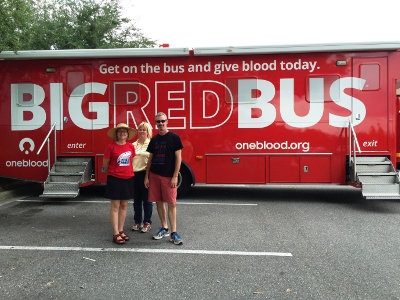 by David and Jocelyn Williamson, Orlando Coalition of Reason

Following the tragic events at the Pulse nightclub, Orlando CoR and its member organizations immediately became part of a national effort to bring hope and comfort to people and families who were affected by the shooting. This was our opportunity to put atheist ethics and morals into action with practical outreach for people who were hurt.

We began a nationwide campaign to provide Humanist memorial services by a GoFundMe fundraiser that attracted $4,000+ in donations within the first ten days. On the 18th of June, the Central Florida Freethought Community hosted a highly-attended Secular Community Support Rally and Blood Drive at a local Target store. While other people came to “pray for Orlando,” we were also invited to participate in this local vigil to show non-theistic support for the victims of the nightclub shooting, which was covered by the media. Many of our non-theist celebrants provided care and comfort to people who filled many of our area’s funeral homes, and it made a difference for people to know that atheists, agnostics, skeptics, Humanists and others had care and compassion for people of all walks of life during such difficult times.

For the CoRs around America who decided to continue with their participation during Pride events, we appreciate your kind words and remembrance for how many lives were affected during the Pulse nightclub shooting. Thank you for asking about Orlando CoR and we appreciate the well-wishes that were sent as well as monetary and volunteer support that we received.