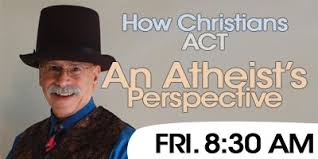 George Gold has been accepted into the Humanist Service Corps, and will spend the next year in Ghana, west Africa.

George Gold is the president of the Atheists of Butte County, past coordinator of the Butte County Coalition of Reason, and he manages the Adopt-a-Highway project on Highway 99 just south of downtown Chico, California. This past year George has been a volunteer with Chico Reading Pals and a mentor at Chico’s Inspire High School.

Over the past few years Gold has seen his son graduate from UC Berkeley, delivered the first ever secular invocation before the Chico, California City Council, and after 20 years with the same company as a computer systems engineer, it took just 2 minutes for them to say, “you have been displaced as a result of a workforce reduction and realignment.” How about something different? Like getting on his motorcycle and riding up to Amboy, Washington to try bungee jumping, then riding up to Tofino Hot Springs in Canada, where he slipped on the rocks, broke three ribs and punctured his lung.

Gold said, “perhaps it’s time to re-energize my activism and create a path that has real meaning. I want to make a difference in the quality of life for others, while at the same time, embark on a great adventure. Having spent the first half of my life not poor but always broke, it  would appear that now I’m in the home stretch of life’s marathon and I’m still in training.  I want to be involved in creating something worthwhile, I want to make a real difference.” Although Gold settled in Butte County several years ago, he was born in Australia and once again will revisit his wanderlust roots. The writer George Eliot (aka Mary Anne Evans) once said, “it is never too late to be what you might have been.”

George Gold has been accepted into the Humanist Service Corps for our 2016 / 2017 plan year. Gold will leave for Houston on July 1, 2016, with four days of meetings followed by two days travel to arrive in Ghana, west Africa. After three weeks of intensive language school in Tamale, northern Ghana, George will remain in Ghana for a year where he will work on building relationships through a variety of projects on the ground. While there are projects already in place, they all center around providing supporting services to Ghanian women who have been declared witches and banished from their communities.

Follow George on his year long journey at his Blog here: http://tinyurl.com/GeorgeGoldBlog (photos)