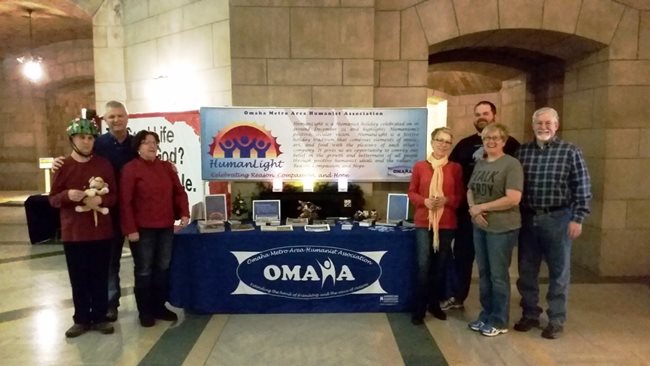 For the second year in a row, OMAHA (the Omaha Metro Area Humanist Association) joined four other non-theistic groups to set up a display in the Nebraska State Capitol building in Lincoln, the week of December 18th – December 26th.  The various displays erected featured information on religion/state separation, a “Tree of Knowledge” with quotes from well-known scientists, information on Humanism, a festive display around the HumanLight celebration observed annually by Humanists on December 23rd, an “Ask an Atheist” booth and even a memorial to “Atheists in Foxholes.” So why did the Omaha Humanists and other local groups decide to erect displays promoting secular ideas and Humanist traditions in a government building the same week that Christians celebrate the Christmas holiday?

It all stared back in 2012 when a group known as the Thomas More Society (a “national public-interest law firm dedicated to restoring respect in law for life, family, and religious liberty”—their own words) opened a chapter in Omaha, Nebraska. One of the items on their list of objectives was to lobby for the right to put up a nativity scene in the Nebraska State Capitol building. The Nebraska State Capitol building finished construction in 1932 and operated for 82 years without any such displays but now that was about to change.  In 2014, during Christmas week, the first ever nativity scene was erected in the capitol building complete with a special ceremony featuring Christmas carols and prayers. 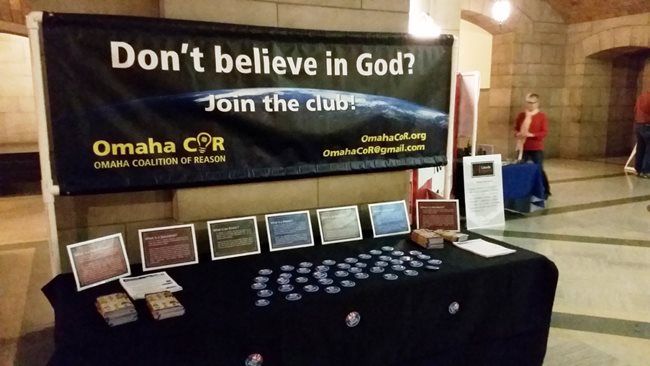 Local secular and non-theistic organizations were caught by surprise when news of the event aired on local television in Omaha and Lincoln. Unfortunately, by that time, it was far too late to get the permissions necessary to counter the nativity scene display with one promoting science, reason and secular values. However, the non-theistic communities in Lincoln and Omaha were not going to sit idly by and allow this intrusion of religion into our state capitol building to continue without a response. And so, seven area secular/non-theistic groups began planning their displays for Christmas week of 2015.

The capitol exhibit display area is in the first floor rotunda and display space can be requested for any (or for all) of the four available corners of the room. When the time came to submit the request for space in the capitol, display space was requested in all four corners with two corners being used by Omaha area non-theistic/secular groups and the remaining two corners being used by Lincoln area non-theistic groups. A few months later, when the Thomas More Society submitted their request for display space, Christmas week was unavailable and so they opted to reserve the week prior to Christmas-week for their display.

When December 2015 finally rolled around, it wasn’t long before the news media caught wind of the story.  Not only was there plenty of outrage that atheists were being allowed to set up displays in the state capitol during Christmas-week, the news that there was subsequently no room in the capitol that week for baby Jesus was particularly galling. Even worse, baby Jesus was actually going to be “kicked out” of the capitol building before Christmas to make room for the atheist’s displays! Que the wailing and gnashing of teeth from the Missouri River to the Wyoming border as outraged Christians voiced their displeasure. 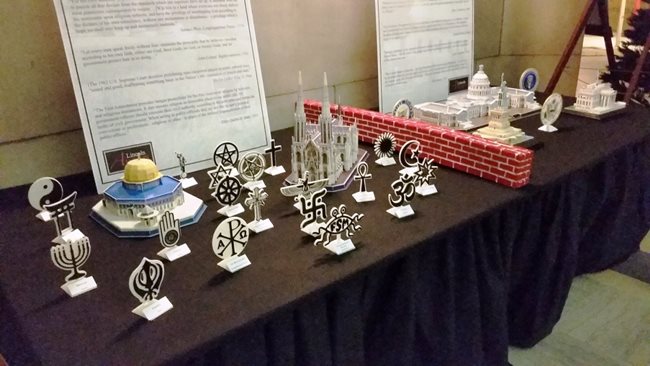 Now comes 2016 and there was an interesting rule change. We were told that the earliest date to request space in the capitol was adjusted down to just 6 months (from 10 months) in advance of an event. Interestingly, when the day came to submit our display request for December 2016, we were informed that two groups had somehow already managed to secure two of the four corners (one group being the Thomas More Society), leaving only two corners for us to squeeze our groups into. However, we managed to make it work this year, ending up with five non-theistic groups, erecting three displays in each of our two allotted corners.

Even though nativity scenes can be found every December in churches across the country and as part of many neighbors’ outdoor holiday displays, that isn’t enough. The Thomas More Society feels the need to force their religion upon the entire nation by erecting their displays in government buildings and on public lands throughout America under the guise of “religious liberty” or religious free speech. But it’s not really about “religious liberty” or the free speech rights of religious groups. Christian’s already have that.  It’s about securing “religious privilege” for Christians in the public square. It’s a relentless push toward their goal of replacing our secular government with a Bible-based Christian theocracy.

Our counter displays serve to put groups like the Thomas More Society on notice that the Omaha Metro Area Humanist Association and the other secular and non-theistic groups in Nebraska are going to be pushing back. We’d prefer we not have to erect such displays but, as long as there’s a nativity scene in the Nebraska State Capitol, we will be there as well providing the voice of reason advocating for secular government and demonstrating to other like-minded individuals across the state that they are not alone and that, in the state of Nebraska, religion will not be the sole voice in the public square. 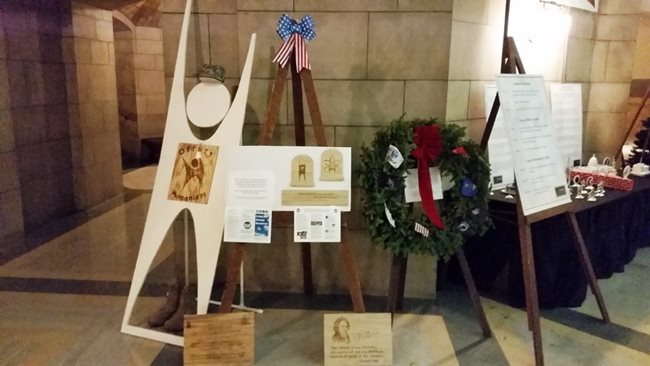 Here’s a link to the official ceremony opening the displays we set up featuring a talk by atheist State Senator Ernie Chambers. Following the talk, there is a Q&A session with members of the media.

Here’s a link to the Thomas More Society’s opening ceremonies on YouTube.

We also received a flood of media coverage, and we appreciate everything that people have done to help publicize our outreach and work in Nebraska: