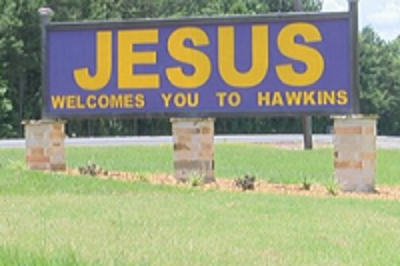 City officials in a small East Texas city say that they have scheduled to remove a sign stating “Jesus Welcomes You to Hawkins.”

The city attorney announced in August that the sign stood on private property, according to a report by Gerardo Martinez on KYTX CBS9. On Monday, city council members told the media that a private contractor says that the sign sits on city property.

Hawkins is in Wood County, Texas, and has a population of approximately 1,300 people. The city has a total area of 2.2 square miles. It is located between Mineloa and Big Sandy, Texas, on U.S. Route 80 in eastern Texas.

Hawkins Mayor Will Rogers told KYTX News,“I just want to express my disappointment for what’s about to take place.” KYTX reported that Rogers made this statement after the council returned from an executive session behind closed doors.

Read the full story at Breitbart