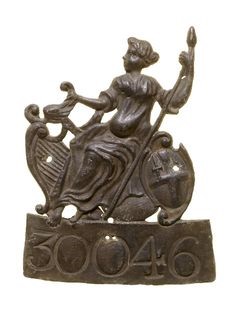 In London during the early 1600s, social services such as policing and fire brigades were not as you and I know them today. For a person whose home had been burned, they had to rely upon the public’s charity, and that also usually meant soliciting charity through local churches and Magistrates Courts. (In his historical work in 1896, W. A. Bewes wrote in Church Briefs or Royal Warrants for Collections for Charitable Objects, that after a person pled for relief through the Court, letters of exhortation were then passed on to local parishes and the vicar then asked people to donate as liberally as possible for “The Week’s Good Cause.”) Following the Great London Fire of 1666, people began to work towards a more effective civic community organization for dealing with natural disasters, and began to create rudimentary brigades which usually consisted of teams of people to douse the flames with buckets of water dipped into ponds or rivers. Insurance companies were then formed to provide private services to train and equip people to deal with fires, and people could then pay for this service, thereby creating the first “fire marks” (symbolized by the plaque above). Problems still remained, however, as competition between companies created situations where people rumored that brigades would not assist in putting out the fires of a house that bore another’s fire mark, as they paid for someone else’s services.

On September 23rd, UnitedCoR’s Twitter account buzzed with messages from the Humanists of Linn County (HLC)—one of the cooperating groups of the Eastern Iowa Coalition of Reason: 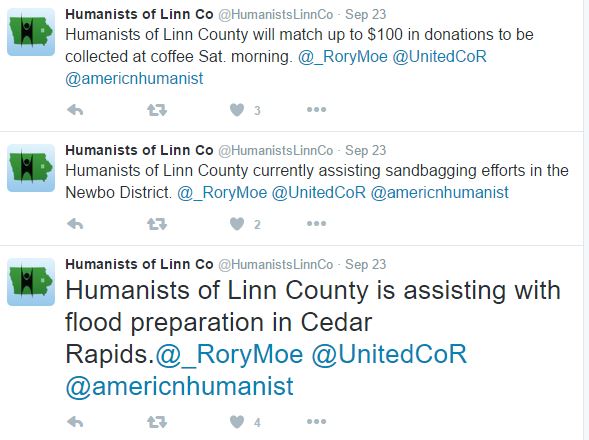 My first reaction was to email the Coordinator for Eastern Iowa CoR, Rocky Gissler, to ask her if she was ok and if any of the CoR’s members had been affected by the flood. Fortunately, they were not, as Rocky replied:

Thank you very much for your concern. I’m fine and my house won’t be impacted by the projected flooding. We have two members with homes in the area and their belongings have been moved already. One more member is just outside the area and we will monitor that situation in case the projected water levels increase. Once I put it out there that we were offering help and taking donations, we were actually contacted by atheists in Cedar Rapids who haven’t participated in any of our activities and who were unknown to us. I’m happy about that, even if it is just for this one thing.

I was relieved to know that all was well there in Eastern Iowa, and I also enquired if there was anything else UnitedCoR could do to help, especially in terms of letting other local groups know that HLC had gone out to help with flood relief in their community. Rocky’s response was thought-provoking:

Some people here don’t want as much publicity all the time because they don’t want us to run the risk of looking like publicity hounds. Their feeling is that we say we do good without any expectation of reward, so we should do good without crowing about it all the time. We aren’t publicity-seeking, but we are publicly encouraging others to follow our example. Between donations this morning and the $100 match from the group, we will be giving $302 for flood prevention/relief efforts. At this point, it will probably be relief efforts because the group coordinating the cash donations has been evacuated from downtown. I can’t tell you how proud I am of this effort: there were only 10 people at coffee this morning and they donated $202. We’re a small group but we are making a big difference.

HLC’s work in their community and their desire to put their non-theistic ethics into action made me reflect on Noelle George’s interview last month. When people perform acts of kindness and charity, perhaps there are times when it is necessary to let everyone else know why it is that they are doing them. Over 300 years ago, the London fire marks were advertising for their organizations. The recent floods in Iowa affected everyone’s homes—not just Christians, Jews, Muslims, atheists, Rastafarians and so forth. When it comes to bringing relief to a disaster, how unreasonable it would be to think “It is my sincerely-held belief to only receive charity from someone of my belief (although we’ve seen this blinkered attitude recently in Oklahoma)”. By letting communities know that non-theistic people care about everyone in their community, and will work for common causes, it demonstrates—yet again– that theistic people do not have a monopoly on morals.

On the other hand, Rocky noted that her friends didn’t want to run the risk of appearing like publicity hounds. This reminded me of the conversation I had with the chaplain at Connecticut CoR’s protest of Franklin Graham last month who bemoaned his perception that his colleagues were unable to provide charity in certain places without also offering sectarian prayers or distributing proselytizing literature. I remember reading somewhere that “When you do charitable acts, don’t turn it into a three-ring circus and attract attention to yourself. That’s what hypocrites do: they like for everyone around them to see what they’re doing and say, “You’re such a wonderful, good and morally-upright person.” Sure, they got their reward then and there, and I’m certain they were popular for it and got lots of likes. When you perform acts of kindness, don’t let your right hand know what your left is doing…just DO good for goodness’ sake. (taken from the King Jase Version)” Perhaps the chaplain was too focused on the branding and advertising and lost sight of the service being given to humanity…he could learn a lesson in charity and his own religion’s theology from the example set by the Humanists of Linn County.