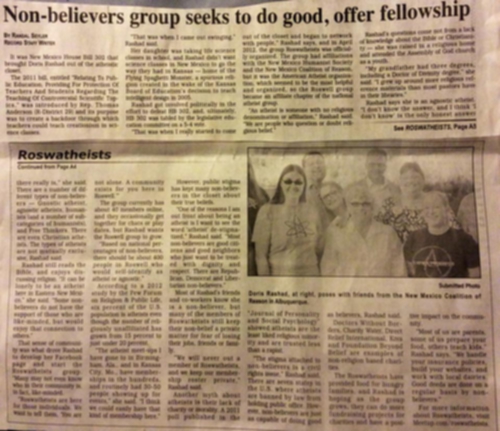 It was New Mexico House Bill 302 that brought Doris Rashad out of the atheistic closet.

The 2011 bill, entitled “Relating To Public Education; Providing For Protection Of Teachers And Students Regarding The Teaching Of Controversial Scientific Topics,” was introduced by Rep. Thomas Anderson (R-District 29) and it’s purpose was to create a backdoor through which teachers to teach creationism in science classes.

“That was when I came out swinging,” Rashad said.

Her daughter was taking life science classes in school, and Rashad didn’t want science classes in New Mexico to go the way they had in Kansas — home of the Flying Spaghetti Monster, a spurious religion created in the wake of the Kansas Board of Education’s decision to teach intelligent design in 2005.

Rashad got involved politically in the effort to defeat HB 302, and, ultimately, HB 302 was tabled by the legislative education committee on a 5-4 vote.

“That was when I really started to come out of the closet and began to network with people,” Rashad says, and in April 2012, the group Roswatheists was officially organized. The group had affiliations with the New Mexico Humanist Society and the New Mexico Coalition of Reason, but it was the American Atheist organization which seemed to be the most helpful and organized, so the Roswell group became an affiliate chapter of the national atheist group.

“An atheist is someone with no religious denomination or affiliation,” Rashad said. “We are people who question or doubt religious belief.”

Rashad’s questions come not from a lack of knowledge about the Bible or Christianity — she was raised in a religious home and attended the Assembly of God church as a youth. “My grandfather had three degrees, including a Doctor of Divinity degree,” she said. “I grew up around more religious reference materials than most pastors have in their libraries.”

Rashad still reads the Bible, and enjoys discussing religion. “It can be lonely to be an atheist here in Eastern New Mexico,” she said. “Some nonbelievers do not have the support of those who are like-minded, but would enjoy that connection to others.”

That sense of community was what drove Rashad to develop her Facebook page and start the Roswatheists group. “Many may not even know who in their community is, in fact, like-minded.

Roswatheists are here for those individuals. We want to tell them, ‘You are not alone. A community exists for you here in Roswell.”

The group currently has about 40 members online, and they occasionally get together for chats or play dates, but Rashad wants the Roswell group to grow.

“Based on national percentages of non-believers, there should be about 400 people in Roswell who would self-identify as atheist or agnostic.”

According to a 2012 study by the Pew Forum on Religion & Public Life, six percent of the US population are atheists even though the number of religiously unaffiliated has grown from 15 percent to just under 20 percent.

“The atheist meetups I have gone to in Birmingham, Ala., and in Kansas City, Mo., have memberships in the hundreds and routinely had 30-50 people showing up for events," she said. "I think we could easily have that kind of membership here.”

However, public stigma has kept many non-believers in the closet about their true beliefs.

“One of the reasons I am out front about being an atheist is I want to see the word ‘atheist’ de-stigmatized,” Rashad said.  “Most non-believers are good citizens and good neighbors who just want to be treated with dignity and respect. There are Republican, Democrat and Libertarian non-believers.”

Most of Rashad’s friends and co-workers know she is a non-believer, but many of the members of Roswatheists still keep their non-belief a private matter for fear of losing their jobs, friends or family. “We will never out a member of Roswatheists, and we keep our membership roster private,” Rashad said.

Another myth about atheists is their lack of charity or morality. A 2011 poll published in the “Journal of Personality and Social Psychology” showed atheists are the least liked religious minority and are trusted less than a rapist.

“The stigma attached to non-believers is a civil rights issue,” Rashad said. There are seven stated in the US where atheists are banned by law from holding public office. However, non-believers are just as capable of doing good as believers, Rashad said.

Doctors Without Borders, Charity Water, Direct Relief International, Kiva and Foundation Beyond Belief are examples of non-religion based charities.

The Roswatheists have provided food for hungry families, and Rashad is hoping as the group grows, they can do more fundraising projects for charities and have a positive impact on the community.

“Most of us are parents, some of us prepare your food, others teach kids,” Rashad says. “We handle your insurance policies, build your websites, and work with local dairies. Good deeds are done on a regular basis by nonbelievers.”