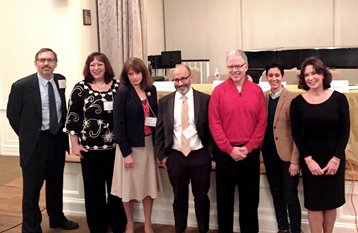 For anyone not familiar with the case, it was the first direct challenge testing a public school district policy that required the teaching of “intelligent design.” In October 2004, the Dover Area School District of York County, Pennsylvania, changed its biology teaching curriculum to require that intelligent design be presented as an alternative to evolution theory, and that Of Pandas and People, a textbook advocating intelligent design, was to be used as a reference book. Because of the notoriety of this textbook at the trial it is sometimes referred to as the “Dover Panda Trial,” a name deliberately devised to ape the infamous Scopes Monkey trial, 80 years earlier. It was successfully argued that intelligent design is a form of creationism, and that the school board policy violated the Establishment Clause of the First Amendment to the United States Constitution. Eleven parents of students in Dover sued the School District over the school board requirement that a statement presenting intelligent design as “an explanation of the origin of life that differs from Darwin’s view” was to be read aloud in ninth-grade science classes when evolution was taught. On December 20, 2005, Judge Jones issued his decision ruling that requiring the statement to be read in class was unconstitutional, that intelligent design was not science, and permanently barred the board from “maintaining the ID Policy in any school within the Dover Area School District.

The daylong celebrations started at 11am with a public platform featuring Hugh Taft-Morales leader of the EHSP. There were several classical musical compositions performed by concert pianist Rollin Wilber, as well as some communal singing before everyone was invited to add a decoration to the Tree of Knowledge which stood in the hallway.

The official anniversary programme started with a wonderful lunch before returning to the main hall to listen to the guest speakers. After words of welcome by the event hosts, Hugh Taft-Morales, Margaret Downey and Janice Rael, followed by presentations from the people who had been involved in the case: Steve Harvey (attorney formerly of Pepper Hamilton, LLP),  Eric Rothschild (partner at Pepper Hamilton), Lauri Lebo (the journalist who covered the trial), and Hedya “Affidavit” Aryani (an associate at Pepper Hamilton). The programme ended with a question and answer panel containing plaintiffs and speakers, each of whom helped the audience understand the twists and turns of the case.

The day ended with a sumptuous buffet, cash bar and engaging discussions on science, education, law, and journalism that took place at various tables. UnitedCoR thanks Margaret Downey and The Freethought Society for hosting a wonderful event!

Wishing everyone a happy New Year in 2016. I’m looking forward to the opportunity to hear of more, exciting work that is taking place in your local CoRs.
–Susan