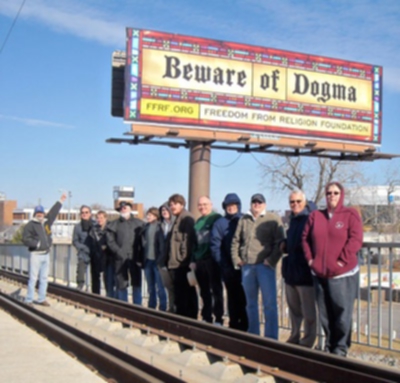 LITTLE ROCK — A nativity scene on the grounds of the state Capitol has again drawn the attention of groups who say the display violates the separation of church and state.

The Madison, Wis.-based Freedom From Religion Foundation and the Arkansas Society of Freethinkers have posted a billboard in North Little Rock in response to the nativity scene and what they claim is the state’s refusal to allow a display offering an alternative viewpoint.

The billboard is designed to resemble a stained-glass window and includes the words “Beware of Dogma” and the foundation’s name and Web address. The sign went up last week beside a bridge connecting Little Rock and North Little Rock.

“What we’d like to see is the nativity scene taken off state property,” said Arkansas Society of Freethinkers member Kirk Dixon of Little Rock. “We don’t believe that they ought to display religious displays on public property. It’s fine if they want to put it on church property, but there is such a thing as separation of church and state, and they’re violating it.”

The groups have objected before to the nativity scene, which is owned by a nonprofit group and erected each Christmas season on the south edge of the Capitol grounds, but state officials have shown no inclination to abolish the tradition.

“It’s privately maintained, it’s located on the periphery of the Capitol grounds and it’s merely a component of the Capitol’s overall holiday decorations celebrating all aspects of the holiday season,” said Natasha Naragon, spokeswoman for Secretary of State Charlie Daniels.

Doug Krueger of Fayetteville, a professor of philosophy and world religions at Northwest Arkansas Community College in Bentonville and a member of Fayetteville Freethinkers, said the only aspect of the season celebrated in the decorations is a Christian viewpoint.

“It’s a pretty blatant way to endorse that particular religion at the expense of other points of view,” Krueger said.

Supporters of the nativity scene say it is appropriate for the holiday being celebrated.

“We have to remember that Christmas is a Christian holiday that celebrates the birth of Jesus Christ, and the nativity scene represents that,” said Jerry Cox, executive director of the Christian conservative group Family Council. “It’s totally keeping with the holiday to have a nativity scene there.”

Earlier this year, the Arkansas Society of Freethinkers applied with the secretary of state’s office for permission to place its own display on the Capitol grounds. Dixon said his group has been trying for about four or five months to get approval for a proposed display that would include information about the winter solstice and secular humanism.

“They’re stalling, just to keep us from putting something up,” he said.

Naragon said the group’s application was denied last month because of a lack of clarity about the appearance of the proposed display.

Annie Laurie Gaylor, co-founder of the Freedom From Religion Foundation, said Tuesday the secretary of state’s response to the application was frustrating and “a little suspicious.”

“The inspiration to do this (billboard) was because of this frustrating situation,” she said.

The group is not planning legal action this year, but Gaylor said the freethinker group would go to the secretary of state next year with a finished display.

If the display is rejected, “then we have a censorship lawsuit,” she said.