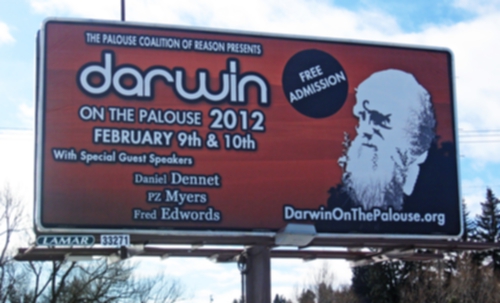 (Pullman, WA, and Moscow, ID, February 1, 2012) – Today, atheists, agnostics, freethinkers and humanists in the Palouse joined forces to announce the launch of their coalition and its first event. The new Palouse Coalition of Reason (Palouse CoR), made up of three non-theistic organizations in Moscow and Pullman, will host leading atheists and evolutionary thinkers PZ Myers, Daniel Dennett, Jen McCreight and Fred Edwords in a pair of International Darwin Day events at two local universities.

These events, which together are called "Darwin on the Palouse," have been funded by the American Humanist Association and are its premier International Darwin Day celebration for 2012. The talks will be held as follows:

Both events are free and open to the public. Additional details can be found at DarwinOnThePalouse.org.

These events are being promoted with a media campaign that includes billboards, radio spots and newspaper ads in outlets across the region. Members of the Palouse Coalition of Reason are also putting up posters and engaging in other efforts to increase awareness. The two billboards announcing the events are in Moscow on the west side of Highway 95 southbound, just north of Sweet Avenue, and in Pullman on the south side of Highway 270 eastbound, just west of Airport Road. Both are illuminated at night.

"We have teamed up with the new Palouse Coalition of Reason to bring four of the nation’s preeminent speakers on science and philosophy to middle America," said Roy Speckhardt, executive director of the American Humanist Association. "We also wish to mark the 203rd birthday of Charles Darwin in a big way, celebrating his continuing contribution to humanity, science and rational thought."

The four speakers are as follows:

Daniel Dennett is a philosopher, author of "Darwin’s Dangerous Idea" and the 2004 Humanist of the Year of the American Humanist Association. He is among the world’s most popular atheist speakers, being one of the "Four Horsemen," along with Richard Dawkins, Sam Harris and the late Christopher Hitchens. He is co-director of the Center for Cognitive Studies at Tufts University.

PZ Myers is an internationally popular blogger through his blog "Pharyngula" and the 2009 American Humanist Association’s Humanist of the Year. As an outspoken atheist he has traveled the world speaking to packed auditoriums, often countering the arguments of creationists. He is a University of Minnesota Morris biologist. Myers was also recipient of the 2011 International Humanist Award.

Jen McCreight, the author of the blog "Blag Hag," made an international name for herself in 2010 with Boobquake, a movement that went viral when she asked women all around the world to expose as much cleavage as they dared to counter the claim of some Muslim clerics that scantily clad women caused earthquakes. She has become a public voice for science and reason.  She is an evolutionary biologist and vice chair of the board of directors of the secular student alliance.

The Darwin on the Palouse events herald not only Charles Darwin’s 203rd birthday on February 12 but the 153rd anniversary of the first publication of "Origin of Species" on November 24.

Coalitions like Palouse CoR have been launched all over the United States in recent years, this being the latest. Since spring 2009 there have been coalition launches, complete with billboards–as well as bus ad campaigns and public events some cases–in 27 states and the District of Columbia. The states are Arizona, Arkansas, California, Colorado, Florida, Illinois, Iowa, Kentucky, Louisiana, Maryland, Massachusetts, Michigan, Minnesota, Missouri, Montana, Nevada, New Jersey, New York, Ohio, Oklahoma, Oregon, Pennsylvania, South Carolina, Texas, Utah, Washington and West Virginia. A coalition launched in Spokane in 2011. Moscow’s participation is a first for Idaho.

"The point of this ongoing nationwide awareness campaign is to reach out to the millions of atheists and agnostics living in the United States," explained Tyler Palmer, Humanists of the Palouse president. "Such non-theists sometimes don’t realize there’s a community for them because they’re inundated with religious messages at every turn. We hope our effort will serve as a beacon and let them know they aren’t alone."

Reaching out to the like-minded isn’t the only goal of the coalition, however. "We hope people will realize we are a regular part of the community," Palmer added. "People like us live all over Idaho and Washington. We’re your friends, family, neighbors and coworkers. We might even be sitting in a pew next to yours at church."

"As an organization we hope to advance our community through rational thought and expanding knowledge. We want to provide a place for people who reject dogma, embrace logic and reason, and to exchange ideas and learn from one another," Palmer reiterated. "Family and societal pressure cause many people to continue outwardly embracing beliefs that inwardly they find silly, antiquated or just plain wrong. We want them to know that they are not alone in our community. We are their coworkers, neighbors, family and friends."

For high-res images of the billboards, free for media use, go to DarwinOnThePalouse.org or PalouseCoR.org.

The Palouse Coalition of Reason (PalouseCoR.org) is made up of atheist, freethought and humanist groups working together in the Pullman, Washington, and Moscow, Idaho area. The twin goals of the coalition are to foster a sense of community among the like-minded and raise public awareness that people who don’t believe in a god or gods can be decent citizens who contribute to the larger society.

The American Humanist Association (AmericanHumanist.org) advocates for the rights and viewpoints of humanists. Founded in 1941 and headquartered in Washington DC, its work is extended through more than 100 local chapters and affiliates across America.

The United Coalition of Reason (UnitedCoR.org) is made up of over 50 local coalitions nationwide and works to raise the visibility and sense of unity among non-theistic groups. It provided additional funding to expand the advertising of the Palouse CoR launch events.