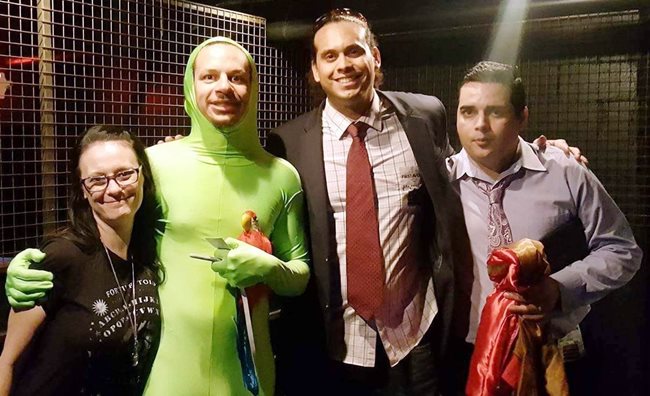 I had the privilege of being asked by my friends at Mythicist Milwaukee if I would like to be interviewed on the Eric Andre Show, live in Minneapolis. As a budding, full-time atheist and secular activist, I was honored they thought of me. Sean Fracek, Fritz Blandón (the two founders of Mythicist Milwaukee) and I made the 5-hour drive from Milwaukee to Minneapolis: my stomach full of those nasty anxiety butterflies. If you’ve never heard of Eric Andre, his show is in its fourth season on Adult Swim (the late-night adult version of Cartoon Network-very popular with Millennials). It’s a parody of the old 80’s talk shows, the host, Eric Andre, dressed in a cheap, thrift store suit and his co-host, the famous comedian Hannibal Buress, relaxed in the guest chair with his drink in hand. The ploy of the Eric Andre Show is his crazy antics, throwing bread, milk, Cheetos™ and lettuce at his audience, among other things, and they love it. People wear ponchos, ready to be soaked by whatever food or drink product Andre has picked for them that night.

When we arrived at the venue, Eric was practicing his voiceovers and some video clips. When he came down, he was very down to earth; introducing himself and asking me if he could say anything he wanted. I acquiesced as long as I could do the same.

About half way through the show, as my cue came up (the ending of a ranch salad dressing drinking contest by members of the audience), I went to the side of the stage and climbed the stairs as Eric introduced me as an atheist activist. The crowd went wild…they loved it, all 1,550 of them!! After this, he jokingly told the audience I was also a professor at the University of Minnesota and called me professor from then on out. (I’m not a professor—yet)! Hannibal got up and I sat down as Eric called me “Crystal Pepsi personified.” I told him I was taking that as a compliment (mostly because I didn’t get it). He began to ask me some questions and told me I had 60 seconds to answer: “What band is worse than the Dave Matthews Band?” I said Nickleback and the crowd loved it. “60 more seconds: as an atheist activist, what do you do? Listen to Led Zeppelin albums backwards?” (Eric is an avowed atheist). Before I could answer, he screamed “Half Time!!!!” and took a baseball bat to his desk. That and the appearance of Kraft Punk throwing cheese at people was pretty much the end of the interview.

The thing that stuck with me the most was the acceptance of my non-belief by the entire audience! They were amazing and obviously happy to see someone on the stage who was vocal in her atheism and not uncomfortable with it. When Fritz, Sean and I went out to celebrate with a few cocktails, I was approached by people who had seen me on stage and congratulated me! All in all, it was a very positive experience. 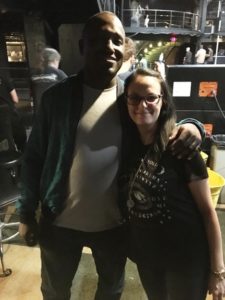 Now to contrast this, think of sitting in a college Psychology 101 class. We are discussing consciousness and the professor has asked for examples of what we think consciousness is. A gentleman said his consciousness was his faith and his god. To diversify the conversation, I raised my hand and said for me, since I didn’t believe in a god, my consciousness revolved around the science that has been discovered so far by neuroscientists and neurobiologists. Well, that was definitely not taken well by my compatriots in the classroom. Out of respect for my fellow students and professor, I won’t mention the name of the University I attend, but I was floored when the questions started:

Student: So you believe in Darwin?

Me: Well yes, he existed so I do believe in him.

Student: And you believe in evolution?

Me: No, I accept evolution as scientific fact. A perspective we discussed in Chapter 1 was evolutionary psychology. It isn’t a belief system.

I could hear the whispers and feel the eyes of my classmates boring into the back of my skull. Really? This is still a controversial subject in college?? My professor even went out of her way to say I was brave to share that and thanked me. Why? Evolution is as factual as gravity. I spoke with my father and he said in 6th grade, they did experiments on fruit flies, exposing them to different kinds of light for generations and could see their eyes changing shape…this was in the 6th grade many years ago!! My friend, Dr. Jerry Coyne—Emeritus Professor of Ecology and Evolution at the University of Chicago, spent his career with fruit flies, watching their genetics change everything from their size, to the span of their wings, and to the coloring of their body. After the professor calmed everyone down, one student raised her hand and said she could see my point, but no one was taking her Jesus away from her. I’m not trying to “take away her Jesus,” and neither was Darwin or any other non-believer today. What we are trying to do is to follow the Constitution’s Establishment Clause and keep religion out of the government, out of public schools and shut down its hold on the health and bodily freedom of both men and women.

I think that all of these arguments play a huge part in the answer of whether or not Millennials are more secular. As I get ready to go to a meeting with the Secular Student Alliance of the University of Chicago, I can almost, ALMOST guarantee that the Millennials I know are more secular, given the basis of discussions we regularly have. After all, my psychology class is not that big, but maybe it needs to expand its worldviews…

Speaking of Mythicist Milwaukee, do you know they have a fabulous conference–Mythinformation Conference III–that’s coming up on Friday, October 21st? For more information, click here!  –Jase