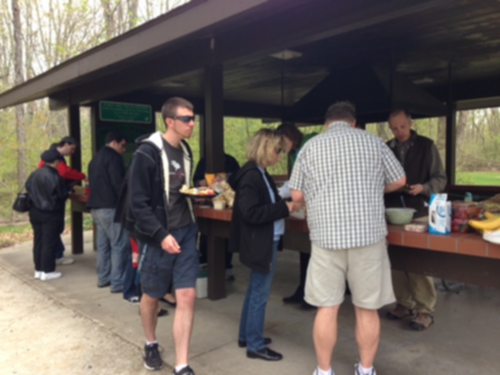 Columbus Coalition of Reason celebrated the National Day of Reason today with a community picnic and potluck at Battelle Darby Creek Metro Park. At the event, Christina McDuffie announced that City of Columbus Mayor Michael B. Coleman had signed a Certificate of Recognition presented to Columbus Coalition of Reason for "its promotion of the importance of reason and to express respect for the dignity of all residents regardless of religious belief. The application of reason can offer hope, solve problems and cultivate intelligent, moral and ethical interactions." 32 attendees, representing various member groups, applauded enthusiastically.

President Obama proclaimed that May 1 be a National Day of Reason. Columbus CoR requested proclamations from the Ohio governor's office (with the Secular Coalition for Ohio), the Franklin County Board of Commissioners and the Columbus mayor's office but did not get a positive response until just before the event. We are grateful to the mayor's office for their response.

The weather was warm and mostly sunny and the park was a fine setting for the croquet, horseshoes, hikes and bike rides that followed the potluck. Avery Winston and Christina McDuffie are to be commended for organizing the event.