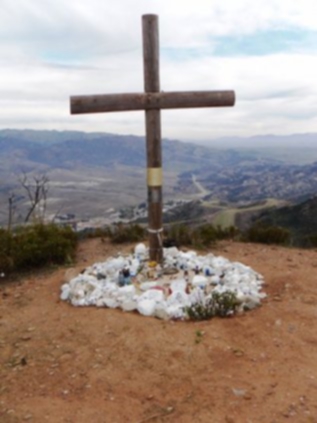 SAN DIEGO — A Marine widow has joined the fight to keep a cross at Camp Pendleton, saying it is the only place she can mourn the loss of her husband, who gave the ultimate sacrifice.

In November, Elena Zurheide and her son Robert were among a small group who made the trek up Camp Horno at Camp Pendleton to help put up a giant 400-pound cross.

For Zurheide’s son Robert, the cross was a tribute to the father he never met: Lance Cpl. Robert Zurheide, who was killed in action in Fallujah, Iraq in 2004.

Last month, a group which included Zurheide and her son helped put up another fire-resistant cross.

"It was very touching and emotional," said Charles Limandri, an attorney for the Thomas More Law Center.

Limandri is representing Zurheide amid a debate over the fate of the cross.

Two atheist groups have urged base leaders to take down the cross, saying the religious symbol on public land is illegal.

Zurheide declined an interview but posted on Facebook, "This is the last place I saw my husband alive. Please leave it up. If not for a grieving widow, do it for his son."

Zurheide’s story is included in a letter from the Thomas More Law Center to the base commander.

10News brought the letter to a group called Americans United For Separation of Church and State.

"I am sensitive to her pain," said Debbie Allen, the president of the group’s local chapter.

Allen showed 10News letters from various groups asking the cross be taken down.

"All Marines have taken an oath to defend the constitution of the USA," said Allen. "Erecting this cross is in direct violation of our constitution."

Others argue the cross is less of a religious symbol and more of a memorial.

"A cross is recognized as a universal symbol of self-sacrifice," said Limandri. "To remove it desecrates the memory of these people."

Camp Pendleton officials have said the cross placement was conducted by private individuals acting solely in their personal capacities and continues to review its legality.

CHANNEL 10 NEWS – Reported by Michael Chen
Michael Chen did take some care to present my opinions accurately.  However, he incorrectly stated that Americans United is an atheist group (it is decidedly interfaith), and he edited 15 minutes of commentary down to 15 seconds…at most. I can add here that I think a great disservice was done to Elena Zurheide by the Military Chaplain who advised her and helped to erect the cross. He should know – both as a defender of the Constitution, and as a Chaplain, that he was engaging in unlawful behavior that would only bring her grief. Had he recommended an appropriate memorial (a non-religious symbol), or suggested an appropriate location (private property, not federal property), this heart-breaking situation would have been avoided. (Debbie Allen)