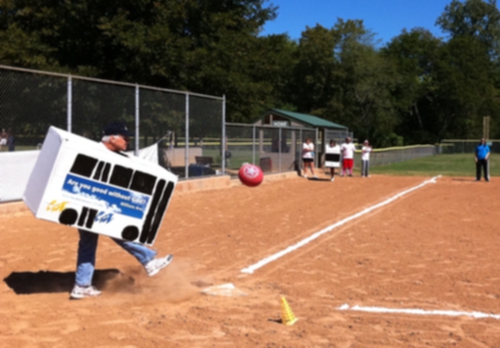 LITTLE ROCK, AR – "Are you good without God? Millions are." The Central Arkansas Coalition of Reason won a first amendment court battle this summer to put that ad on Central Arkansas Transit buses. Now, the atheist group is taking that message to the kickball field.

Thomas is team captain of the Non-Prophets. They spell the team’s name that way because most of its members are also Arkansas Freethinkers. They are part of the Central Arkansas Coalition of Reason, the atheist group that fought and won a legal battle to put these ads on Central Arkansas Transit buses.

So what’s up with the cardboard costumes? In the Laid Back League anything goes.

"How easy or difficult is it to maneuver out there wearing the costume?" asked FOX16’s Kelly Dudzik.

"It’s quite difficult actually. When we’re kicking, we tend to just have our head out, but on the field, I have both my arms through the head hole so I can actually grab the ball and field it," says Thomas.

Thomas says even religious people should understand why the judge ruled in favor of the coalition of reason.

"This is a win-win for everybody because free speech, if it’s going to be truly free, needs to allow everybody’s message to go up. And, we just wanted the same treatment and had to go through court to get it, but we finally did and the ads will be out soon, and we’re happy about that," says Thomas.

Thomas told FOX16 that you could start seeing the ads on buses as early as this week.