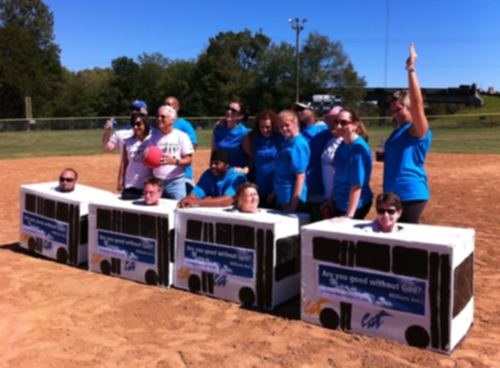 "Are You Good Without God? Millions Are," that’s the message scheduled to be placed on Central Arkansas Transit Authority’s city buses very soon, however this Sunday they will definitely be on a different kind of bus and their route will be on a kickball field.

The Non-Prophets are a team of Laid Back League kickballers who mainly come from the membership of the Arkansas Society of Freethinkers, a group within the Central Arkansas Coalition of Reason. The team’s logo has the Ascent of Man with the last figure kicking a kickball with a beer in hand.

This Sunday, October 2, The Non-Prophets will play a double-header that will include them wearing cardboard CATA buses with the "Are You Good Without God? Millions Are" advertisement on them. The team made the props for kickball in a show of support for the upcoming ad campaign that will be hitting the real CATA buses very soon.

Those unfamiliar with Laid Back League kickball should know that many times teams dress in themes either as a team or in conjunction with their opponents for the day.

This Sunday the Non-Prophets play Kickin Grass & Takin Names at 12 noon and then Pitchin Ain’t Easy at 2:30pm. Both games have The Non-Prophets as the home team and both games will be played on field 2 at Interstate Park (4100 Arch St. LR, AR).

"Our LRKA (Little Rock Kickball Association) allows costumes and props in the Laid Back League," says LeeWood Thomas, captain for the team. "We wanted to show our support to the Central Arkansas Coalition of Reason. These bus props show that support in a very LBL kickball style of way."