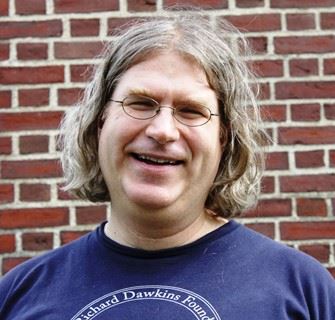 Johnny Monsarrat thanks atheism for introducing him to Liv Tyler from the Lord of the Rings movies. His first project for the nontheist community was in 2011, building the official website for The Ledge, the first Hollywood film to feature an atheist protagonist and atheism as its main theme.

He worked directly for director Matthew Chapman, whom he had met at an American Atheist convention as part of interviewing for the Richard Dawkins Foundation. Monsarrat was told that he accomplished more promotion of The Ledge with no budget, contacting nonbelief groups and podcasts directly, than IFC Films and its PR agency. Johnny did eventually get a consulting job at the Richard Dawkins Foundation, working as the Alliance Director and helping to plan amongst other things Richard’s book tours, which were the most fun part of the job. If you attended Richard’s tour and met a fat guy handing out clipboards to everyone to get signups for the mailing list, then you have most likely met Johnny. Johnny is tall as well as big, so he has two reasons to shop at a Big & Tall men’s clothing store.

Johnny Monsarrat has also held executive roles at the Secular Coalition for America, United Coalition of Reason, United Church of Bacon, and the Secular Policy Institute. He won a Guinness World Record for his secular community art project, Soulburners. He is the author of a book by the same name which is at yet unpublished, but he has high hopes for it. He joined the United Coalition of Reason through his website development work for the Secular Policy Institute, the worlds largest coalition of secular groups and world’s largest think tank of secular academics.

So how did Johnny Monsarrat meet Liv Tyler? Having helped with promotion for the movie, he was invited to attend the premiere, so drove out to New York with his crazy friend Wendy. Wendy was such a big fan of the Lord of the Rings movies, and thought of herself as a hobbit, that she was thrilled to speak briefly with Liv at the party. We also met her co-star, Patrick Wilson, whom you may know from the movie, The Watchmen. Johnny has finagled a few meetings with other celebrities, and has learned that sometimes, your hero disappoints you, sometimes you disappoint your hero, and sometimes both! So beware what you wish for.

You can reach Johnny through his blog on New England events, Events INSIDER, which is dedicated to interactive events, wide open spaces, and festivals.