Rachel Maddow, the popular MSNBC news anchor who is openly gay, caused a stir this week when she said that closeted gay anchors “have a responsibility to come out.” The statement renewed an old debate about whether coming out is a right or a responsibility.

What is the basis for arguing that one has a duty, not just a right, to come out?

To help understand, we can refer to some words from Harvey Milk, the San Francisco gay rights activist who was assassinated in 1978, explaining why open identification can be so important: “I would like to see every gay doctor come out, every gay lawyer, every gay architect come out, stand up and let that world know. That would do more to end prejudice overnight than anybody would imagine.”

Pride in identity can be empowering, an antidote to even the most venomous prejudice. By forcing society to rethink what was once considered wrong or shameful, Milk and other identity-oriented LGBT activists changed the cultural landscape and weakened longstanding biases.

But still, is the good that results from coming out enough to make it a duty? If staying in the closet helps perpetuate discriminatory attitudes, does that give rise to a responsibility to come out?

Taking it further, as a humanist activist I wonder whether Maddow’s comment might be applicable to the secular movement. After all, in a 2006 study atheists were found to be the most disliked and distrusted minority group in America, ranking below gays, Muslims, and recent immigrants. While prejudice against any of these groups would be wrong, one must question why atheists would be so disfavored, especially since numerous studies show that, from a statistical standpoint, atheism does not correlate to high crime rates, health risks, or any other immoral or socially undesirable outcome. With so much prejudice against them, it’s not surprising that many atheists are “closeted” to some degree, hesitant to identify openly.

Hence, is there an argument that secular individuals – atheists, agnostics, and humanists – have not just a right, but a responsibility, to come out, to identify openly in some manner to family, friends, neighbors, co-workers and/or the world at-large?

Statistics suggest that significant portions of the American population are essentially secular in outlook: About half the population does not attend any regular religious services, about 15 percent identify as “none” when asked for religious affiliation, and almost one in five will not affirm a belief in a divinity. Yet, despite the undeniable existence of this large demographic, politicians and media pundits rarely even acknowledge nonreligious Americans when discussing policy or current events. This no doubt can be attributed to the fact that, despite the size of the nonreligious population, relatively few have historically asserted self-identity as atheist, agnostic, humanist, or otherwise secular. 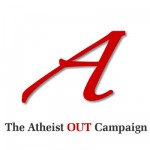 Would a concerted campaign to encourage secular individuals to “come out” change public attitudes? The Richard Dawkins Foundation for Reason and Science thinks so, and even launched the “Out Campaign” to encourage atheists to come out. The campaign’s scarlet “A” is now seen frequently in online profiles and elsewhere.

In the 1980s and 1990s we saw the landscape change when congressmen and other high-profile public figures began coming out as gay. Today, only one congressman is an open atheist (Rep. Pete Stark of California), though it is well known that many others are closeted. Do they have a responsibility to come out? Would doing so help to diminish unfair prejudice and challenge the Religious Right’s claim of moral superiority based on religiosity?

Of course, there are significant differences between being gay and being an atheist, and few would suggest that the discrimination experienced by atheists is equivalent to that experienced by gays and lesbians. Even though atheists are the most disliked minority, being an atheist is not an experience that is particularly difficult on a day-to-day basis. The realization of a teen that he or she doesn’t believe in a divinity, for example, doesn’t normally carry with it the gravity and real-life ramifications that come with realizing that one is gay.

Nonetheless, there are serious personal and social consequences that come with keeping atheists closeted. Religion becomes exalted and validated in an atmosphere of apparent general consensus about its value, while the public’s association of religion with morality is reinforced, thereby affecting the entire social, cultural, and political landscape. All of us, including future generations, pay a price as a result thereof.

Thus, perhaps some would argue that Maddow’s statement holds true for the secular community as well, that atheists, agnostics, and humanists have a responsibility to assert their identity to some degree. If it does, even under Maddow’s standard the duty arises only “if and when we feel that we can.” As such, whether seen as a right or a responsibility, the decision to come out is ultimately a personal one.