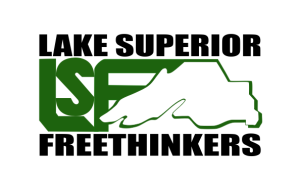 Lake Superior Freethinkers was founded in 1997 by psychiatrist Dr. William van Druten of Duluth, Minnesota.  He worried that the ownership of all local hospitals by the Roman Catholic church would unduly restrict options for his female clients.  Working with others who did not want monopoly ownership of health services, he was able to see that take-over blocked.  Later, working with the American Civil Liberties Union, he was able to see a Ten Commandments monument removed from the grounds of the City Hall.  Lake Superior Freethinkers is a friendship group in support of morality without superstition, church-state separation, freedom from religions, and rational thought.