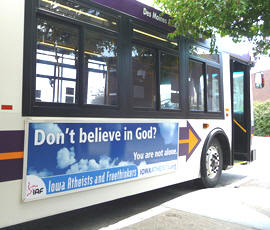 After initially choosing to remove atheist themed ads from Des Moines buses, the Des Moines Area Regional Transit Authority has reversed its decision. The ads were intended to send a positive message to atheists in Des Moines, and were placed by Des Moines atheist organization, Iowa Atheists and Freethinkers.

After a meeting with the Iowa Atheists and Freethinkers (IAF) on Friday, the Des Moines Area Regional Transit Authority (DART) has now decided to allow IAF’s ads to run on the sides of buses. The ads should be up and running, as originally planed, during the Iowa State Fair.

DART has also inadvertently raised the profile of the Des Moines atheist organization and their message, by deciding to censor the ads, which ask “Don’t believe in God? You are not alone.” IAF is a member group of the Central Iowa Coalition of Reason, representing Iowa atheists, humanists and other non-believers.