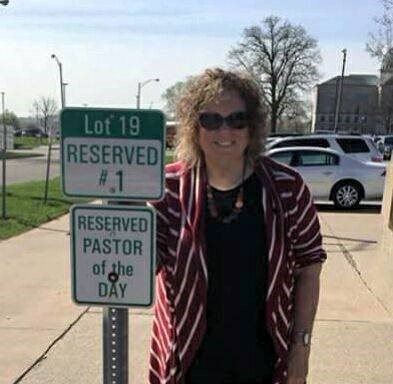 The Humanists of Linn County, a chapter of the American Humanist Association and a member group of the Eastern Iowa Coalition of Reason, hosted a successful “Reason On the Hill” Day at the Iowa State Capitol Building on Monday, April 17, 2017, from 12:00 pm until 2:30 pm. Secular organizations and secular-friendly allies from across Iowa and as far away as Chicago, Illinois gathered in the rotunda and spoke with legislators about the importance of reason and critical thinking when serving the people of Iowa. They also sought to highlight the necessity to ensure that the “wall” that separates religion and government remains intact in the Hawkeye State. 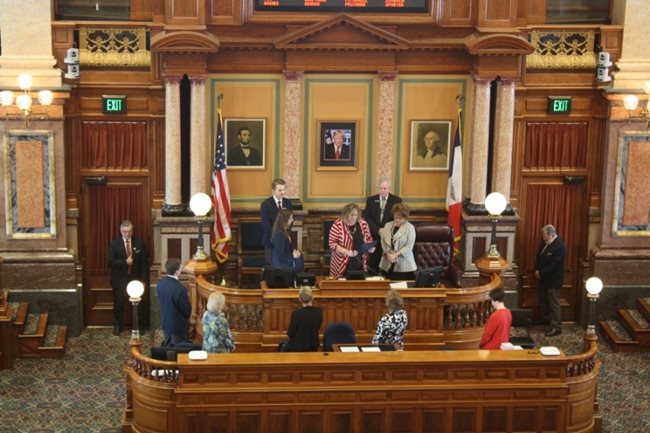 Roxanne Gissler—President of Humanists of Linn County, and an endorsed Humanist Celebrant—gave her non-theistic invocation [advance to 4’45”] in the House Chambers at approximately 1:00 pm on Monday (see the text of the invocation at the bottom of this article!). As far as we have been able to determine, this was the first Humanist invocation given at the Iowa Capitol. “When I received the invitation to provide the invocation, we quickly noticed that this was an opportunity to show our elected government officials that secularists and secular-friendly allies are found throughout Iowa, and that there are more constituents like this than they realize,” said Gissler. “Thanks to our PR Director, Joe Stutler, we reserved the rotunda at the capitol and made other groups and organizations aware of the opportunity. We are hoping to make this an annual event and anticipate that attendance and interest will grow, just as the percentage of Iowans identifying as non-religious is also rapidly growing.”

Gissler and her colleagues from the Humanists of Linn County were joined by people from as far as Chicago, Illinois as well as within the state of Iowa. Rory Moe, the Coordinator of the Central Iowa Coalition of Reason (based in Des Moines) added his reflections to the event’s importance. “The US Constitution states that Congress shall make no law respecting an establishment of religion. These are wise words from our Founding Figures! Yet, in 2014 the Supreme Court decided that prayer before public meetings did not violate the First Amendment’s Establishment Clause. Basing this decision on “tradition” and the supposedly “non coercive” nature of the prayer, it has nevertheless proved exclusionary to people of minority faiths or those with no religious affiliation.” Moe added, “It is therefore vital and proper that all voices be heard if the so-called tradition of prayer or invocation prior to public meetings is to be continued. The monopoly of a privileged few is past, and we now call upon our Jewish, Muslim, Sikh, Jain, Buddhist, WICCAn, Rastafarian and other religious neighbors to add their voices to the start of Iowa government assemblies, from local to state levels. Our nation is a place for everyone, not only a select few.”

With local, grassroots people coming together in celebration of the plurality and diversity of sincerely-held beliefs that makes up the United States of America. Connie Clancey, the Secretary of Humanists of Linn County, summarized the event: “Reason on the Hill celebrates the potential for all our legislators to use reason and critical thinking to guide their actions, keeping in mind that they make decisions for all Iowans and should not fall under the spell of any particular group of citizens. All sincerely-held beliefs matter and all have a right to be heard and exercise their right to vote.” 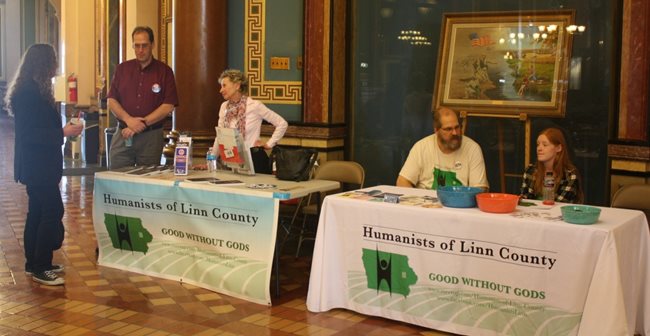 Rather than asking guidance from anyone or anything today, let us instead take a moment to reflect, and to see who and what is right before us. As a Humanist, it is not part of my sincerely-held belief to close my eyes in deference to a deity, but rather to look at the people around me and to appreciate how important all of us are to each other. Please take a moment to look around at all the people in this room. Without any judgment, try to see them as simply your fellow Iowans, your fellow Americans, your fellow human beings…all doing the best they can to traverse the trials and the joys of this human life. Now, imagine the more than 3 million people of this state the same way, without judgment. See the men, women, and children of all races, cultures, and belief systems. Look at individuals of different sexual identities and orientations. Notice people of all different levels of physical, emotional, and mental wellness and ability. Recognize people of different socioeconomic levels and political inclinations.

I could go on and on, because this is a diverse state and it’s becoming more so every day. If there’s any place all people should be able to find respect and inclusion it is here, in this House that represents all people. We each face the consequences of our decisions and actions every day, and for Humanists, this immediacy is particularly important because we don’t think in terms of waiting for an afterlife to atone for whatever wrongs we have done. We believe we must do good right now, because this is the only opportunity we have. For most of us, the consequences of our decisions and actions affect only ourselves or a small number of people around us. But Humanists recognize that, as legislative representatives, you bear the responsibility of making decisions that will affect each and every one of those more than 3 million diverse individuals. 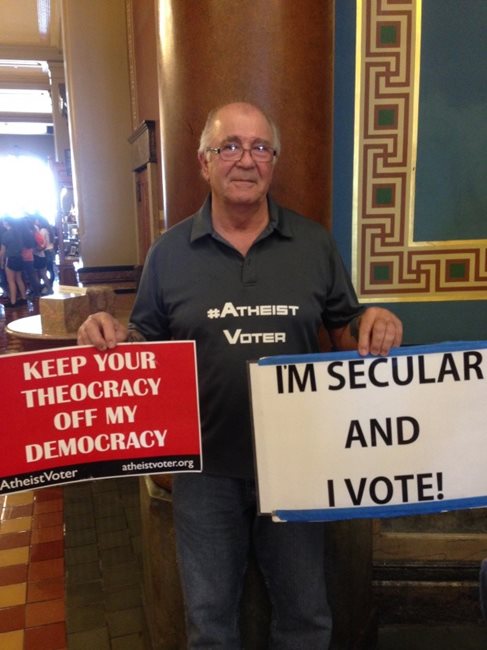 The positive and negative consequences of these decisions are profound. Today and every day, Iowans hope that you see them…that you respect them…that you acknowledge them…and that you will use reason, compassion, empathy, and a desire to be forces of good in the world to guide your decisions and your actions. Let today not only be a day of reason on the Hill, but also a day of reflection and renewal of the commitment we all have to each other to respect our shared humanity and to move forward with a greater understanding of how your actions impact everyone.

And we ask these things in the name of GOOD.