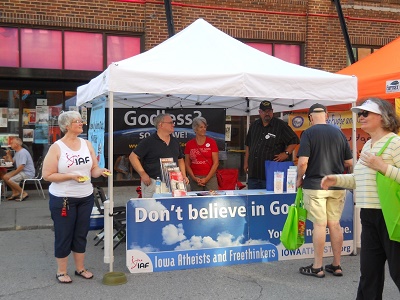 For many years the Iowa Atheists & Freethinkers, member of the Central Iowa CoR, have placed a booth at the Des Moines Farmer’s Market. The Downtown Farmer’s Market has been ranked #2 of the 101 Best Farmers Markets In America by The Daily Meal for 2013 and 2014. The Market has over 200 vendors spanning nine city blocks and 20,000 visitors on any given Saturday. The IAF has a booth on Memorial Day, the 4th of July and Labor Day holiday weekends. Setup begins at 6:00 am and the event runs from 7 am to noon. The booth now incorporates the signs from the 2009 bus ad campaign “Don’t believe in God? You are not alone.” AND the 2014 Central Iowa CoR billboard campaign “Godless? So Are We!”

This Labor Day weekend we expected to face a number of argumentative people in the wake of the Kim Davis situation in Kentucky. To our surprise the crowd was overwhelmingly supportive! On the side of the booth is another banner declaring “Keep Religion Out of Politics” and that garnered many positive comments including folks that said even though they believed in God they agreed with that message! There were many, many people that stopped by and asked us more about the group and picked up literature. The IAF’s “Get Out of Church Free” cards are a big hit! Sure, there were a few negative comments thrown at us such as “Shame on you guys!”, “What you need is MORE God!” and “I’m glad I’m not an atheist!”. Unlike past Farmer’s Markets we had very little in those who wanted to debate or argue. Public sentiment has certainly seemed to change since the huge controversy of the Des Moines Metro bus ad campaign six years ago!