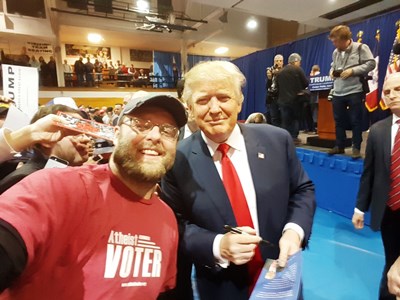 By now, we’re certain that everyone has read all the stories flooding the global media about the person who has approached Presidential hopefuls and asked them their opinions about atheist voters and issues of secular concern. When visiting the two Iowa CoRs last week, UnitedCoR was able to meet with Justin Scott of the Iowa Atheists and Freethinkers, who has become famous for saying, “Hi, I’m an atheist and…” to most of the frontrunner candidates. His personal story and experiences are fascinating, and UnitedCoR is pleased to have the opportunity to focus on the person behind the stories. Here’s your chance to find out more about the person inside the #AtheistVoter t-shirt! 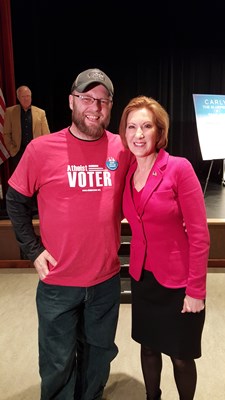 Justin Scott: ​Great question. When I “came out” as a non-believer it didn’t seem like enough. I felt that I wasn’t maximizing my talents to talk, share, influence and network with atheism or secularism in mind. There wasn’t one moment, there was a growing desire in me to get out and be seen and heard. I felt that many other atheists and secular activists had paved a path to right now and it was my job to “take the torch” and blaze a new trail for our values and stances on a variety of important issues.

​Interestingly enough, I get just as fired up connecting with an “on the fence” atheist and hearing where they’re coming from to try and help them through the process of becoming an “out” atheist as I do standing in crowded political rallies, especially ones that don’t support the secular vision for America, and standing up for what we believe in. It’s truly a neat place to be at right now in the secular movement!

​SC:  You’ve been very active with the #atheistvoter initiative. What is it that appeals  to you the most about this initiative? 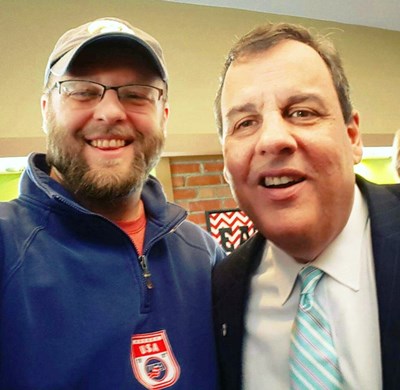 JS: ​What’s the most interesting about this is that I have known about it for a while but for some reason I hadn’t gotten out and been active with it due to some family things that I was focused on. Once I got those figured out, it was off to the races. I didn’t have any Atheist clothing or anything that would designate publicly that I was an atheist (or openly secular) at first but that actually helped me warm up to understanding the best ways to present my questions, especially when surrounded by hostile crowds.

Once I started seeing success with my activism in the presidential race, I reached out to David Silverman at American Atheists to share with him what I had been up to and what I had been able to accomplish. Dave was not only very appreciative of my efforts but wanted to make sure that I helped the cause the best way I could so he actually overnighted me an Atheist Voter t-shirt to increase the visibility of the effort. From what I’ve seen out on the campaign trail, I’m the only one rocking this specific shirt so it’d be great to see more wearing it in other states once the Iowa Caucus is over and the madness moves to other states.

UnitedCoR’s Executive Director pretending to be a presidential
hopeful being photographed with Justin.

As for the initiative, what appeals to me the most is how bold it is while not being overtly obnoxious. Some in the religious world would argue that just wearing a shirt that says “Atheist Voter” is provocative but I don’t believe it is. Hell, there are people in my hometown on Manchester, Iowa, that have “Proud to Be Catholic” stickers on their cars. You want to talk about “provocative,” the only thing that would be more provocative than that, I believe, is a bumper sticker that said “Your religion sucks, mine is better!” I have an even better idea, “How About No Religion?”

I really love that there is even this initiative available for atheists, non-believers and secular Americans to take part in. It doesn’t require much from us to get involved. From wearing a shirt with it on it to sending out tweets and social media posts that include the #AtheistVoter hashtag, everyone can get involved in raising the visibility of who we are and what we hope to accomplish. 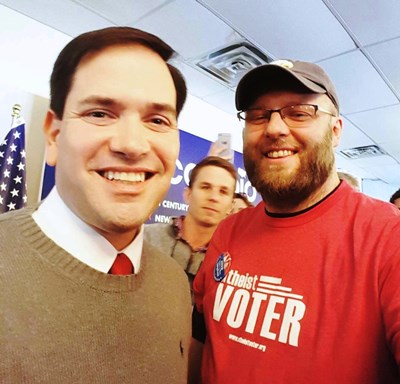 SC: What advice would you have for others who are considering getting involved in #atheistvoter?

​Own it. Completely and unapologetically own that you are an atheist, that you stand up for the atheistic viewpoint and secular values. We don’t have to apologize for this. We should demand and expect the same amount of attention as any other Americans, especially from those that are running for the most powerful position in the world. 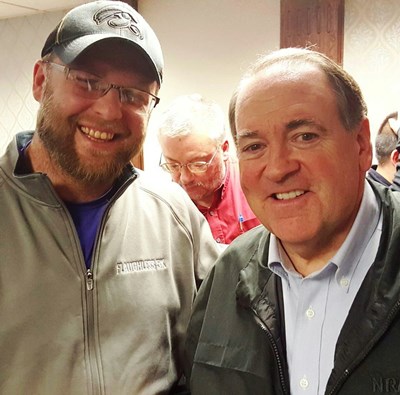 SC: Have there been any particularly funny or nervous moments when you’ve been challenging or asking politicians for their opinions?

JS: Funny? The very first event I went to was at the Pizza Ranch in my hometown on Manchester, Iowa, for an event with uber-conservative Rick Santorum (the 2012 Iowa Caucus winner). I had never approached a candidate as an atheist and certainly never stuck a smartphone with a videocamera on it in a candidate’s face. I was certain that I was going to be escorted out by the police or his security detail for even asking the questions I did about his stance on the Establishment Clause (Separation of Church and State) let alone videotaping his responses.

As he answered, I tried keeping my phone out of his view; I kept it close to my chest trying to keep it covered with a napkin from the table. Thinking back on it I just chuckle at this as I now go right up to the candidates and stick my phone right in their face (well not literally but you know what I mean, haha!) 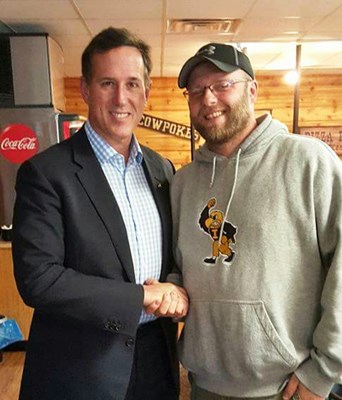 About being nervous: You know, some would think that going to the Donald Trump rally, standing in the front row with an Atheist Voter t-shirt would lead to the mob coming after me but actually it was a Ted Cruz event at a small coffee shop in Charles City that got my pulse going compared to the rest.

This was a standing room only event and everyone there was elbow to elbow in anticipation for Mr. Cruz to arrive. I had put on a Cruz for President sticker to try to blend in with the crowd and not “show my cards” as to why I was there (I was yet to get my Atheist Voter t-shirt so I was just in street clothes so it worked). Once he arrived, he worked the crowd into a pro-God, pro-gun, anti-Obama frenzy before eventually asking for questions. As I raised my hand to ask him my questions (I was the first one to ask a question mind you) I said in my head “Hold on tight, here we go!” It was now or never. I started my question with “Hi, I’m an atheist…” and took a deep breath…

While I expected the absolute worst it went extremely well. Despite being surrounded by probably some of the most ardent and devout God-believers that I had been around during this whole experience, not a single one of them mocked me, yelled at me, told me to shut up, threatened me or physically assaulted me. I know it’s human nature to assume that it would happen but for all the years I’ve lived in Iowa, I’ve come to know that for the most part, that’s now how Iowans operate. We understand that we all have to live together. I got a few raised eyebrows thrown at me but nothing to get worked up about. 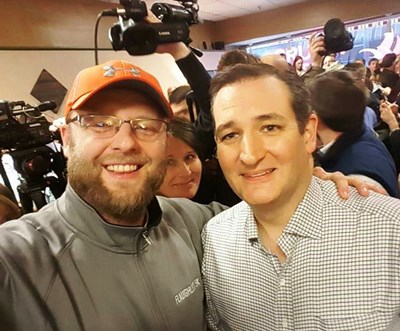 To date the Cruz event was the one that set the bar for me in terms of unwarranted and irrational nervousness that I reflect on right before I approach other candidates. Good stuff. =)​

SC: For each one of these candidates you have questioned/interviewed, what was the most memorable moment?

JS: The most memorable moment of this entire experience has to be the media tidal wave that took place after my exchange with Marco Rubio…I’ve been told that my exchange with him may have just been the deciding moment of his entire run here in Iowa (we’ll have to wait and see on Feb. 1st) but essentially this was the moment that he was needing to really capture the attention of the Evangelical vote here in Iowa.

Once the Associated Press published the story about my exchange with him, this thing grew wings and took off! It was eventually covered by Time magazine, USA Today, ABC News, the Boston Herald, American Atheists, the Friendly Atheist, the Huffington Post, the Des Moines Register (the largest newspaper in Iowa), our local TV station (which interviewed me on-air in my Atheist Voter t-shirt), the Daily Caller, Herman Cain’s Facebook page and a few Christian media outlets. Not only that but this story has been shared like crazy across social media!

One memorable thing from the ​Rick Santorum event…his campaign had reserved a back meeting room but due to low voter turnout they moved us out to the main eating area. He literally went around to every booth and table asking them for their vote despite the fact that more than half of the room wasn’t there for him, they were there to eat. 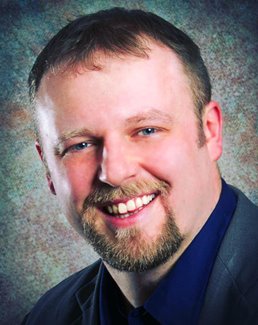 I would say that for most of these (Santorum, Huckabee, Fiorina, Christie, Cruz) the most memorable moment was nothing more than the response that my questions got from the entire rooms. It was usually a mix of gasps, whispers or just plain dead silence that would take over the room as I would start off with “Hi, I’m an atheist…” I assume for many of the Iowans in the room, I was the first open atheist they had ever seen.

UnitedCoR is appreciative of Justin’s continued efforts to provide nontheistic representation in Iowa during this election season. We admire your dedication with asking some difficult questions to people who are our country’s decision-makers.

From what we understand, Justin’s videos have been used by campaign managers without having first received permission from him, and we’re certain that they will eventually do the right thing. If you want to follow more of Justin’s work and activism, please find him on Facebook and Twitter!