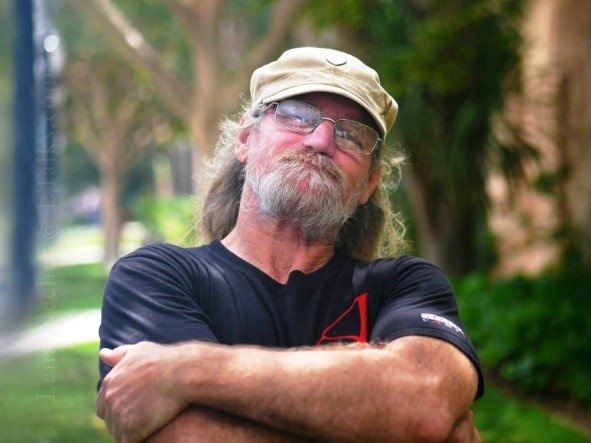 by Susann
Education Officer and National Coordinator–United Coalition of Reason

For the past three years, UnitedCoR has kept close contacts with various local leaders and volunteer activists in San Diego, California. Throughout these conversations, we’ve heard about one dedicated local volunteer in particular: Rob Hudson. Rob is well-known for dedicating his time each weekend for FIVE consecutive years to host a table for local non-believer outreach in Balboa Park. Rob’s story is fascinating, and he also has learned a lot of practical lessons along the way!

UnitedCoR: Tell us a little more about your personal journey to non-theism. What were some of the most important steps along the way for you?

Rob Hudson: I grew up in a non-religious family, so god never came into the picture when I was younger. As I got older, most of my friends were religious, so I thought you were suppose to be religious. The first place I looked was at history, and I could see the evolution of the idea of gods. What was interesting to me was how the idea of what people believed about gods changed over time. But a common theme that really popped out at me: every time nature did something, it was attributed to the supernatural. It seemed to make sense to me that any natural disaster it had to be the gods punishing humanity—or so people thought.

I always like mythology, and Joseph Campbell is kind of a hero of mine. I was always curious as to what different people believed, so I started reading about different religions. History is my favorite subject, so I spend a lot of times reading about it: I’ve never run out of news things to read.

UnitedCoR: How long has your outreach programmes in Balboa Park been going? What inspired you to start that kind of outreach?

Rob Hudson: We’ve been setting up in Balboa Park for five years now. We’re very lucky to have the park and the beautiful weather here in San Diego, so we can set up year round. I’m sort of an accidental activist. I did not start the booth, and I came in on the second or third week. There was some discussion about who was going to take the table and pamphlets home and bring it back. I had fun and knew I was coming back so I volunteered…and now it’s just habit.

UnitedCoR: Throughout your experience with the tabling in Balboa Park, what are some suggestions you’d give for other people who would like to do something similar in their local area? Also, what are some lessons your groups have learned along the way, in terms of best practice?

Rob Hudson: I think having a tent is very nice. Portable shade. We have extra chairs, which means that besides doing the outreach/ask an atheist, it is a place to hang out and it lets theistic people who pass by see for themselves that atheists are normal, friendly members of their community. I joke about our open chair policy: you can come with a chair, but if you get up, anyone can sit in it.

I really can’t stress enough that one of the main things is to be polite, even if you are talking to someone that you know you’re not going to change their mind. Then you can use them to talk to people who are actively listening and giving consideration to what you’re saying. I’ve had people come up to me after the obstinate person left and asked questions about what I was talking about because they had never heard these things talked about before.

It’s helpful to know theistic/religious arguments (especially creationism and pseudo-science). If you don’t know something, be honest and genuine enough to say you don’t know it. If you know someone has special and in-depth knowledge about a particular topic, call them over to answer a question (don’t “lone wolf” it). At our booth we have a biologist, physicist, philosopher and I specialize in history.

One of the oddest lessons I have learned: Not all atheists are happy to see us. I call them the angry atheists. We have had a few people do this: they come up to the booth identify themselves as atheist and proceed to yell at us, asking why we are there, etc. We’re no different than the religious booths that set up down a little ways from up, so it really has puzzled me. Most of the time, even when we explain ourselves, they just yell some more and then leave.

UnitedCoR: Tell us about some times/personal stories where you feel as if your outreach work made a difference–either to you, locals who come to read the literature or discuss things at the “Ask an Atheist” booth, or perhaps the larger community in San Diego?

Rob Hudson: One of the things we don’t set out to do is make more atheists—we aren’t there to proselytize. If someone changes their belief and leaves a theistic worldview, I want it to come from them and be something that is genuine and thought-through. But, what we do is try to get people to think about what they believe and how they believe, thereby encouraging proper critical thinking, and I’m proud to say that we have been very successful with that. We’ve also done a great job of changing the perception of believers towards atheists (hence saying to be polite, and not being arrogant or rude). People often walk up to us and say, “I’ve never talked to an atheist before.” We usually smile and reply, “You have…you might not have known it.” We get people that don’t understand how we can be moral without a god and we explain how. 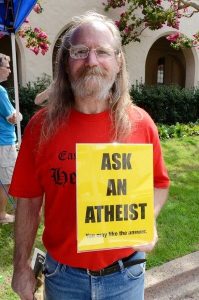 UnitedCoR: How does a regular, outdoor set of booths help to change public perceptions about what it means to be an atheist?

Rob Hudson: People have gotten used to us being there. In the first couple of years, we got a lot of negative feedback. We also used to get what we call a “drive by”: someone walking by and says something like “God loves you,” “You’re going to Hell,” or my favorite, “I’ll pray for you!” When people do that, our response is “I’ll think for you”…one guy said “Don’t bother,” which that got a laugh.

Lately, though, the majority of people give us positive feedback, particularly people from out-of-state who say they have never seen anything like this before. A lot of the time, we get believers who stop by, not knowing what to expect. Of course, we’re friendly and neighborly to them. The biggest impact on the general believing public is that they leave smiling, because of a pleasant conversation and wholesome interactions with our booths. More importantly, they know, now, that people can be and are good without requiring a belief in a god.

UnitedCoR thanks Rob for taking time out of his schedule and local activism in order to spend time with us for this interview. We wish him and his friends all the best with their continuous outreach in San Diego’s beautiful Balboa Park.

You can check out Rob’s outreach table on Facebook, and learn more about what he has been doing.