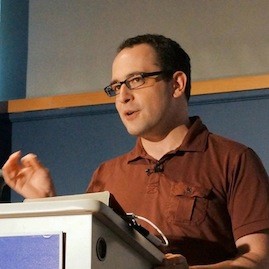 Paul Fidalgo is communications director of the Center for Inquiry, and previously led communications for the Secular Coalition for America and FairVote: the Center for Voting and Democracy. He holds a master’s degree in political management from George Washington University, where his master’s thesis was on atheists in American politics. Paul is also an actor and musician whose work includes five years performing with the American Shakespeare Center. He lives in Maine with his wife Jessica, and children Toby and Phoebe. His personal blog is Near-Earth Object. He kindly allowed us to interview him for this article.

UnitedCoR: What’s the origin of the Center for Inquiry?

Paul Fidalgo: CFI as we know it today began as a kind of melding of different groups with a similar philosophical foundation, both started by the philosopher Paul Kurtz. In the 1970s, he along with people such as James Randi, Carl Sagan, and Isaac Asimov began what would be known as the Committee for the Scientific Investigation of Claims of the Paranormal, better known as CSICOP. In the 1980s, Kurtz founded a group that questioned the claims of religion and advanced secular humanism, the Council for Secular Humanism. I’m skipping a great deal of detail here, but the gist is that these two organizations shared not only a founder and a building, but a common foundational mission to freely question extraordinary claims and the assertions of faith, superstition, and dogma, all in order to make the world a better place for everyone. Over the decades, these organizations formally unified into one, the Center for Inquiry, where the Council and CSICOP (now renamed the Committee for Skeptical Inquiry) live on as programs of CFI. They still pursue their particular concerns, but it’s all driven by the same core beliefs.

UnitedCoR: How has CFI changed over time?

Paul Fidalgo: Organizationally, obviously it’s changed a lot in that what was once many programs and groups have come together into a more unified whole. CFI is an institution with a rich history, and it’s a history we’re constantly building on and drawing on. The biggest recent change of course is that we are in the process of doing even more unifying, but this time with an outside ally, the Richard Dawkins Foundation for Reason & Science. Their leader, Robyn Blumner, has become CFI’s new CEO, and the Dawkins Foundation will become part of CFI, part of that rich history. We’re already operating as one organization, but of course the behind the scenes details take some time.

I think it’s also worth noting that two things that distinguish CFI from other organizations is first our breadth, tackling issues ranging from quack medicine to church-state separation, and from paranormal investigation to fierce advocacy for free expression. Second is our international focus and global presence. We have branches all across the U.S. and in countries around the world, and we are leaders in the fight for free expression and against things like blasphemy laws in countries like Bangladesh and Pakistan.

UnitedCoR: How did you come to be part of the freethought movement?

Paul Fidalgo: I was stirred to become active by the debates generated by the so-called “New Atheists” and what I saw as a blatant hostility toward nonbelievers in politics. I devoted study to the subject, and began writing more and more seriously about it, and eventually was invited to speak at CFI’s DC branch, which was quite an honor. Eventually I landed my first job in the movement, at the Secular Coalition for America.

UnitedCoR: How did you come to the Center for Inquiry?

Paul Fidalgo: I have always felt a close ideological kinship to CFI, it’s the freethought group that most aligned with my own values, so it’s something I had wanted to do for some time. When my current job opened up in early 2012, I had just moved to Maine from Washington, DC, but Ron Lindsay, then the CEO and still president, was willing to give me a chance as a telecommuting communications director. After a few months of testing it out, it was clear this was going to work, and I’m extremely grateful for that. I’m deeply proud of the work we do, and I’m still here!